Al-Alimi: The Houthis have turned Sanaa airport from a humanitarian file into a political issue 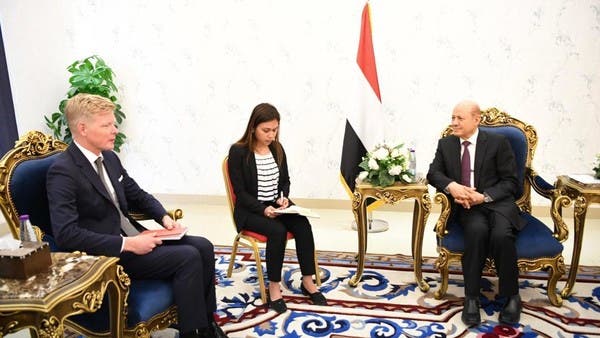 Today, Tuesday, the head of the Yemeni Presidential Leadership Council, Rashad Muhammad Al-Alimi, renewed his support for the humanitarian truce in the country under the auspices of the United Nations, with all its provisions, including the insistence on opening the crossings to the city of Taiz, which is besieged by the Houthis.

This came during his meeting today in Aden, along with the Vice-President of the Presidential Leadership Council, Brigadier General Tariq Saleh, Prime Minister Dr. Maeen Abdul-Malik, the UN envoy to Yemen Hans Grundberg, and the accompanying delegation.

During the meeting, the president heard a briefing from the UN envoy, Hans Grundberg, on the efforts made to establish a humanitarian truce, which leads to alleviating the suffering of all the Yemeni people.

The Chairman of the Leadership Council affirmed to the UN envoy the readiness of the legitimate government to provide everything necessary to facilitate the success of the UN efforts to bring peace to our country, leading to an end to the coup carried out by the Houthi militia with Iranian support.

With regard to Sanaa airport, Al-Alimi confirmed that the legitimate government made many proposals, but they were met with clear intransigence by the Houthi militias.

He pointed out that the Houthi militia had transformed Sanaa Airport from a humanitarian file into a political issue, and diverted this file from its humanitarian goals for which the agreement was concluded.

Al-Alimi, the UN envoy, reminded of the need for the Houthi militias to commit to handing over salaries to state employees from the revenues from the oil revenues of the Hodeidah port, as stipulated in the Stockholm Agreement.

During the meeting, he also stressed the need to expedite the implementation of the prisoners’ agreement, in accordance with the agreement signed with the Office of the UN Envoy.