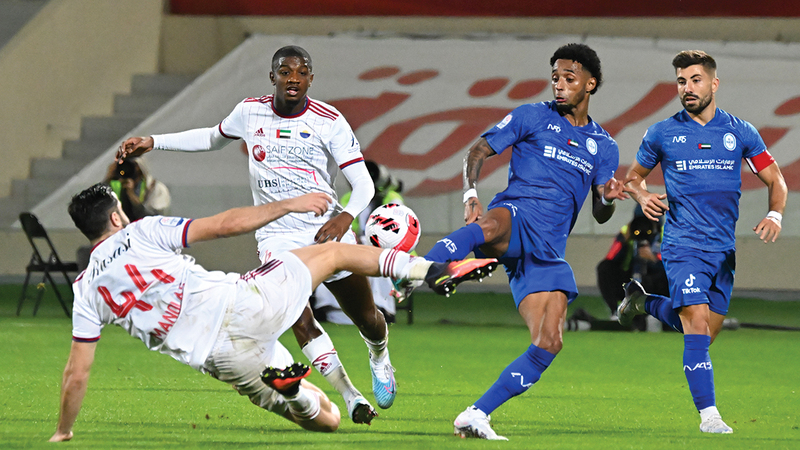 Sharjah converted its delay against its guest Al-Nasr into a positive draw 1-1, after the latter was leading by a clean goal until the 79th minute in an exciting match that brought the two teams together yesterday at Sharjah Stadium, within the 13th and final round of the first round of the ADNOC Professional League. With this tie, Sharjah maintained the lead, raising its score to 27 points, while the tie deprived him of confirming the title of “Winter Champion”, pending the outcome of today’s match between Shabab Al-Ahly, who finished second with 25 points, and Ajman, while Al-Nasr raised its tally to eight points in 12th place.

The brigadier general, who was the best in most of the match periods, refused to win, to continue the negative results.

Sharjah suffered a strong blow at the start of the match, after referee Adel Al-Naqbi issued a red card to his goalkeeper, Adel Al-Hosani (18), for blocking Al-Nasr striker Menil Malaba, so Sharjah coach Cosmin withdrew the player Luan Pereira and replaced him with goalkeeper Darwish Muhammad, and Sharjah completed the match minus 10 players. Despite advancing with a goal in the first half, Al-Nasr did not take advantage of the numerical shortage in the ranks of Sharjah by expelling goalkeeper Al-Hosani.

Al-Nasr’s intense pressure on the landlords’ goal in the first half resulted in him scoring a reverse goal (30), scored by goalkeeper Darwish Muhammad by mistake in his own net from a deceptive ball played by Moroccan player Al-Nasr Adel Taarabt, while the referee canceled a goal for Al-Nasr in the second half scored by Malaba (57) for offside. . Sharjah equalized from a penalty kick, which was scored by Brazilian Caio Lucas (79).

The Nasraoui shirt appeared for the first time in the starting line-up, the two new players, the Togolese striker Benil Malaba and the Bosnian Samir Memicevic.

Al-Ain survives the bump of Al-Bataeh

The Al Ain team survived falling into a tie trap for the fourth time in a row in the ADNOC Professional Football League, and achieved a difficult victory over its host Al-Bataeh 3-2 at Saqr bin Muhammad Al Qasimi Stadium, to put “Al-Zaeem” point 22 in his score, while the points of “Al-Raqi” froze. at 13.

Al Ain player, the Togolese international Laba Kodjo, cut the bar for the goals of the match in the 27th minute, giving the “leader” an opportunity to catch a breath, especially since the start of the match was quick and did not pass through the stage of feeling the pulse, and the guests translated their domination of the match by scoring the second goal in the 35th minute by Ukrainian Andrey Yarmolenko.

Al-Zaeem completed the meeting with 10 players since the minute (1 + 45) after his player Eric Jurgens got the second yellow card, which caused a lot of mistakes, one of which resulted in their net conceding the goal of reducing the difference in the 60th minute, when defender Kwame Koidu turned the ball by mistake. in his team’s net.

The visiting team’s defensive mistakes continued, which conceded the equalizing goal 2-2 by Brazilian Lawrence Du in the 81st minute, but guest striker Lapa Kodjo returned to appear in the last minutes and score the winning goal in the 87th minute, to give his team a difficult victory, after his team had tied in the last Three rounds in a row.

Al-Wasl restored the memory of victories by defeating Khorfakkan with three goals without a response, at Al-Wasl Stadium in Zabeel, to raise the “Emperor” score to 25 points, while the “Eagles” score stopped at 15 points.

Al-Wasl presented a strong match after dominating the course of the game in the first half, and Moroccan defender Sofiane Bouftini scored two goals, “copy and paste” after Ali Saleh played a corner kick, and the “Panthers” player met it with his head in the goal (10), scoring the first goal, and in the same way he added the second goal of A ball was also played by Saleh, and Boftini turned it with his head, and it hit the crossbar and crossed the goal line (23). On the other hand, Khorfakkan relied on counter-attacks, but without danger to the Al Wasl goal, and the Brazilian Elton led the most prominent attack and singled out the goal, but hit the ball in the hands of goalkeeper Khaled Al-Sanani (16).

For his part, Ali Saleh played one of his best matches in the current season, and he was the most active player of the “Panthers”, and almost consolidated Al Wasl’s victory on more than one occasion, most notably a ball he played “on the bird” and passed next to the post (38), and another ball he hit powerfully from outside the penalty area. It came close to the goal (43).

In the second half, Al-Asfar continued its advantage, and Brazilian Gabriel de Souza scored the third goal after a wonderful individual effort and skillfully hit the ball into the goal (61), while Khorfakkan’s performance improved, but the brilliance of Al-Wasl defense and goalkeeper Khaled Al-Sanani contributed to the “emperor” maintaining its progress and achieving victory by three. Unanswered goals.

Ittihad Kalba player Ahmed Amer led his team to defeat its guest Al-Jazira with two goals to one, bringing Kalba’s balance to 20 points, while Al-Jazira’s balance was frozen at 23.

And Ahmed Amer succeeded in scoring both goals in Kalba, as the first goal came after a long pass from Brazilian Leandro Spadayo, before Amer put it to the left of Al Jazira goalkeeper Ali Khaseef in the sixth minute.

Al-Jazira got a penalty kick after blocking player Omar Traore, from which Ali Mabkhout scored the equalizing goal (40).

Ittihad Kalba succeeded in scoring the second goal through Ahmed Amer in the 88th minute, after a header hit Ali Khasif’s net.