“Al Asif” is the champion of the Al Maktoum Rowing Cup 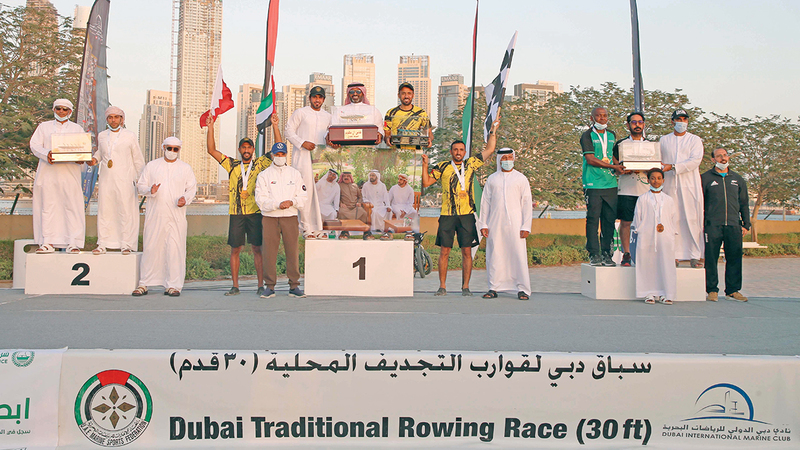 The two boats (Al-Surfa 36), owned by Hamdan Saeed Jaber, and led by the captain Badr Abdul Hakim bin Thani, and (KHK) by their owner Sheikh Khalid bin Hamad Al Khalifa, and led by the captain Ahmed Nasser Al Busmait, were crowned two champions of the Al Maktoum Cup for local and open 30-foot rowing boats. . 31 boats, carrying about 300 sailors, participated in the celebration of the silver jubilee of the great event.

The second place in the first half went to the crew of the boat (Gold 60) owned by His Highness Sheikh Ammar bin Humaid Al Nuaimi, Crown Prince of Ajman, and led by Al Nokhatha Juma Al Junaibi, while the third place went to the crew of the boat (Julfar 55), owned by His Highness Sheikh Saud bin Saqr Al Qasimi , Ruler of Ras Al Khaimah, and led by Nokhatha Badr Al Shehhi. The open half competitions witnessed the crowning of the Bahraini boat (KHK54) owned by Sheikh Khalid bin Hamad Al Khalifa, led by the captain Ahmed Nasser Al Busmait, as a champion to win the big title for the second time in a row, an achievement that counts for the crew of the team that participated strongly, achieving victory after victory.

After the end of the race, the Secretary-General of the Dubai Sports Council Saeed Hareb, accompanied by the Executive Director of the Dubai International Marine Club, Mohammed Abdullah Hareb, and Lieutenant-Colonel Ali Abdullah Al-Naqbi, Head of the Maritime Rescue Department in Dubai Police, honored the top three places in each run, handing them medals and winning figures. And the Gold Cup for the two-half champions, separately.

The most expensive rowing boat race witnessed a special celebration, where the dolphin team of the Fire and Maritime Rescue Department in the General Directorate of Civil Defense in Dubai, presented a distinguished participation, through interesting performances, and the Dubai Police General Command contributed to the success of the great event from the team of positive spirits and volunteers, in addition to To ensure the safety of the event participants.