Al-Balooshi: The national team shirt is “heavy”…and those who wear it must make sacrifices 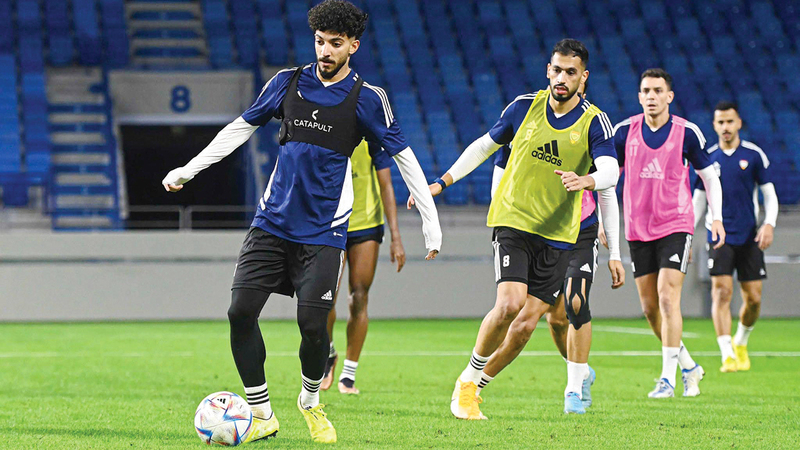 The midfielder of the first national football team and Al Ain team, Khaled Al Balushi, described the national team shirt as heavy in weight and that any player who wears it must always make all sacrifices in order to achieve victories, stressing that he is very happy to be called up to the final list of the team participating in the Arabian Gulf Cup. Football club «Gulf 25», which will be held in the Iraqi city of Basra from 6 to 19 January.

Al-Balushi, 23, told Emirates Today that wearing the national team shirt requires the player to play matches with spirit, determination and enthusiasm, and to do his best, adding: “When you carry the emblem of your country, you must be ready to make sacrifices. The 2022 World Cup in Qatar, and how the precious and precious players sacrificed themselves on the field for their country. We must follow their example and try to return the favor to our country, which did not fail us in anything.

Al-Ain player Khaled Al-Balushi experienced great moments of joy after announcing the expanded list announced by the Argentine national team coach, Rodolfo Aruabarina, but his joy doubled after he saw his name in the final list of “Al-Abyad”, especially as it coincided with his return to the starting line-up for “Al-Zaeem”. », as he played the last five matches, including the last match against Al Wasl, starting.

Al-Balushi recounted how he was in front of the TV screen to follow the wonderful march of “Al-Abyad” in his journey towards crowning the “Gulf 21” title that was held in Bahrain, and he said: “I remember that I was 13 years old at the time, at that time I was a player in the Sunni stages in The club and I remember the details of that tournament because I watched it with great interest.

Khaled Al-Balushi has legitimate dreams, represented by his desire to be crowned with “Al-Abyad” in the “Gulf 25” and the 2023 Asian Cup, and he said: “My dream is that we succeed together in winning the Gulf championship and adding the Asian Cup to it. And to be up to the challenge in these two tasks and future tasks ».

The final list of the national team witnesses the presence of an abundance of experienced players in the field of advanced midfield, which may reduce the opportunity for Al-Balooshi to appear mainly with “Al-Abyad” in the Gulf championship, but the player is confident in his abilities by obtaining the opportunity to appear in the championship matches.

He concluded, “I realize that the tournament will be difficult, there is no easy competition, and I know that getting a seat in the squad will not be easy at all, but I am sure that every hardworking person has a share.”

The “Gulf 25” championship will be the first official mission for the young midfielder Khaled Al Balushi in the national team shirt, after he participated with him in previous gatherings, and said: “My happiness cannot be described in words. Having such an opportunity at the present time and in the presence of other distinguished players means I have a lot, and it puts me in a new challenge by proving my abilities with the help of the national team every second that I can participate in.