Al Darmaki: I sacrificed everything to win a championship with Al Dhafra 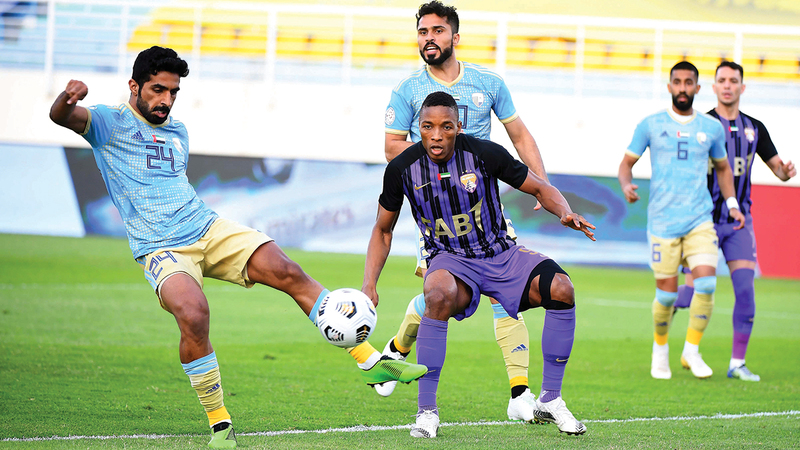 Al Dhafra midfielder Khaled Al Darmaki pledged to do his utmost to help his team in the new season that begins next month. He told “Emirates Today”: “I sacrifice everything in exchange for winning a championship with Al Dhafra.” Al Darmaki stressed that “his main goal is to climb to the podium with his colleagues to receive one of the three tournaments in which his team participates: the President’s Cup, the ADNOC Professional League, and the Abu Dhabi Islamic Bank Cup.”

He added, “The preparatory camp that started in the middle of this week in the Serbian capital Belgrade is going well, and we are all trying as players to make the most of it, by getting to know the thought of the new Serbian coach Nebosha Vjnevic, who was signed by the club last month.”

The Al Dhafra team player confirmed that the players are committed to implementing the program set by the technical staff, and that they realize the importance of reaching an advanced stage of technical readiness before the start of the new season, in order to avoid the negatives that appeared during the past year, as the team had launched its participation at the time before the completion of Technical readiness and the conclusion of deals to compensate for the absence of players who left the squad. The team wants to achieve the required and complete readiness before the start of the new season competitions.

Al Dhafra Football Company had a golden opportunity to implement the new project for the restoration of the team, and its transformation 180 degrees from a club struggling to survive to a team competing for titles, after last season it avoided relegation to the amateur league in an exciting way, and stuck to hope and decided to stay by winning over Orouba in the last round of the league.

Khaled Al Darmaki, 30, expressed his great hope that he and his colleagues would be able to achieve the goals set by the new management of Al Dhafra Football Club, led by Murshid Khalfan Al Marar, and said: “We hope to be up to the challenge, and to achieve the goals that have been set for us in the new season.” related to occupying an advanced position in the ADNOC Pro League competition.”

The Al Dhafra team player added that “their strategy for the President’s Cup and the Abu Dhabi Islamic Bank Cup is clear.” -19), of course, we have the same passion to reach that match again, but this time we want to have the honor of lifting the title and not just attending the last scene.”

Al Dhafra Club had settled the file of foreign players before the start of the preparatory camp for the first time in years, as it contracted with Tunisian Walid Karoui from Sfaxien, as well as with Moroccan origin, Dutch national, Mohammed Rayhi from Saudi Arabia, and Brazilian Claudio Rafael de Santos. Coming from Moroccan club Olympique Safi, and Dutchman Michel T Freddy from Saudi Abha, while Brazilian striker Lucas Candido has renewed his contract.

The midfielder confirmed that the start of the summer camp with full ranks of foreign players helps greatly in creating the required harmony between the players, adding: “The team has almost changed its skin, many players have moved to other teams. The new administration, led by Murshid Khalfan Al Marar, succeeded in resolving Deals with special players.

Al Darmaki praised his new teammates, and said: “They have good resumes, and some of them have an idea of ​​the leagues in the Gulf region. Certainly, we, on our part, will work as one hand, in order to help them so that they will be an important addition to the team, by harnessing their technical abilities for the benefit of the team and achieving goals set by management.

The new administration hopes that the new coach Nebusha will succeed and the new deals with local and foreign players will change the identity of the team. Over the course of five years, specifically since the 2016-2017 season, when he finished the championship in seventh place with 35 points, Al Dhafra continued to struggle to ensure survival among professionals, despite He qualified for the President’s Cup final twice.

“All Al Dhafra players realize the importance of reaching an advanced stage of technical readiness before the start of the new season.”

“We want to have the honor of lifting the title of one of the championships, and not just being present in the last scene.”