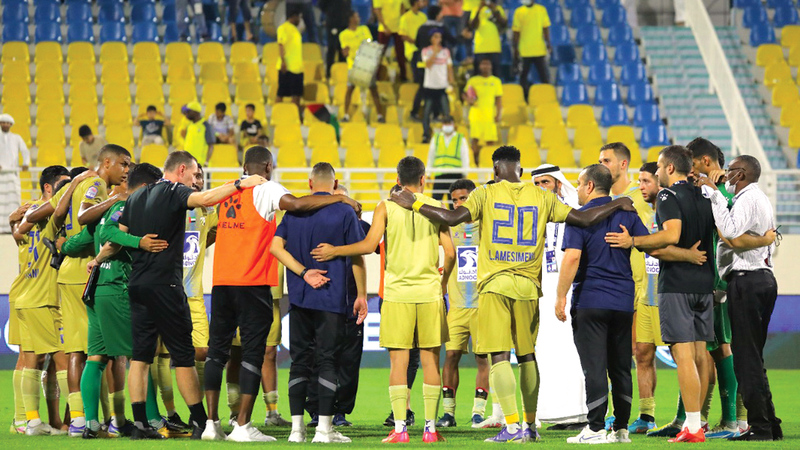 Emirates Al-Youm learned that Al Dhafra Football Company is studying the idea of ​​benefiting from some veteran players, who imposed the same mystery and unknown fate on their future with their clubs, after they became outside the lists of their teams, with less than two weeks left until the summer transfer window closed, at a time. The team suffers from a substandard start (a 1-1 draw with Al-Nasr, a 0-7 loss by Al-Ain, 0-2 against Ittihad Kalba).

At the fore in the discussions within the club’s technical committee is the necessity of concluding new deals with experienced players in the league, after the team had dispensed with its main pillars during the last period, and started a new era with Serbian coach Nebuša Vjentić, but the lack of the experience factor, and the lack of harmony between the players was clear. In the team, he was eliminated by only one point out of nine. The source stated that some names were put forward, but the discussions were not completely closed about the names put forward, and that the administration was dealing positively with the proposal made on the importance of taking advantage of the names available in the transfer market, to strengthen the team’s strength and correct the path ahead of time, so that the team does not enter into a spiral doubt.

And the football company got a golden opportunity to implement the new project for the restoration of “Fares Al Dhafra”, and its transformation 180 degrees from a club struggling to survive to a team competing for titles, after the team avoided last season the spiral of relegation to the First Division in an exciting way, and cling to hope. Until the last round of the tournament, before he stamps on his survival credentials and save the new venture.

Over the course of five years, specifically from the 2016-2017 season, when he finished the tournament in seventh place with 35 points, the Al Dhafra team has been struggling to ensure survival among the professional clubs, despite having qualified for the President’s Cup final twice, which has been repeated this season. Which was the most difficult among the other seasons, as he waited until the last round to achieve his survival.

The club made drastic changes during the current summer transfer market, as it dispensed with all its foreign players, and some citizens, and strengthened its ranks with completely new deals, but this caused the squad to lack the experience factor in the league, and harmony among them, which made the administration seriously consider correcting the path By obtaining the services of some veteran players in transfer deals.

Earlier, «Emirates Today» published a report about 10 players who are not on the list of their teams so far, on the grounds that their contracts were not renewed, or they left the technical options for their coaches, led by Al Ain striker Jamal Maarouf, Baniyas midfielder Amer Abdul Rahman, and Al Ain defender. Muhannad Al-Enezi, Al-Ain player and former Al-Wasl player Mohammed Abdul Rahman, defender Hamdan Al-Kamali, whose name was emptied of Al-Ahly youth list, in addition to Al-Wasl player Muhammad Sorour, and Al-Nasr defender Muhammad Ayed.