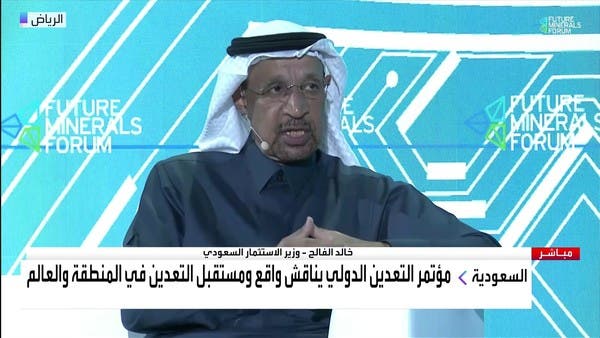 Saudi Investment Minister Khaled Al-Falih said that work is underway to establish commercial arbitration centers in Saudi Arabia to support the investment environment in the Kingdom.

Al-Falih added in a dialogue session within the activities of the International Mining Conference held in Riyadh, that 80% of the objectives of modernizing investment systems in the Kingdom have been implemented.

The Saudi Minister of Investment stated that King Abdullah Economic City will soon be transformed into a special economic zone.

Al-Falih pointed out that the city of Rabigh and its facilities is an important destination for investments.

“Bold investments are important in the industrial economy, such as the city of Oxagon, which is paving the way for a new era of zero carbon emissions,” he said.

Al-Falih pointed to the importance of infrastructure, as the Al-Khair Road, which extends 1,400 km, will be established, and the railways will expand further in the Kingdom, in addition to the fact that 8,000 km of railways will enhance the transportation infrastructure, and this will be added to the current network in the Kingdom, which is ranked first in the world. In connection with the road network and workers in the mining sector can move around comfortably and easily.