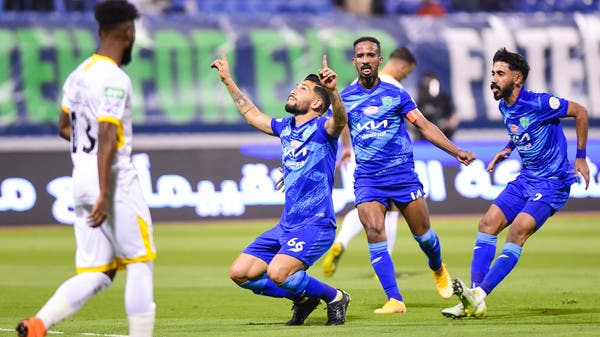 Al-Fateh snatched an exciting draw from its guest Al-Ittihad 4-4, on Friday, in the 26th stage of the Mohammed bin Salman Professional Cup League.

Petros advanced to Al-Fateh in the ninth minute, but Al-Ittihad scored the equalizer through Romarinho in the 17th minute.

In the 20th minute, Igor Cornado scored the second goal for Al-Ittihad, before Abdul Razzaq Hamdallah added the third goal in the 42nd minute.

In the third minute of the calculated time instead of lost, Firas Al-Braikan scored the second goal for Al-Fateh, before his colleague Sufian Bin Dabka equalized by scoring the third goal in the 60th minute.

Al-Ittihad managed to advance the result again through Romarinho’s fourth goal in the 77th minute, but Firas Al-Braikan scored his third goal in the match and the fourth for his team in the 83rd minute.

Al-Ittihad raised its score to 61 points at the top of the standings after playing 26 games, 12 points ahead of Al-Hilal, the second-placed player, who played only 24 games.

On the other hand, Al-Fateh raised its score to 32 points in eighth place.