Al-Fateh tied with Damk in the ten goals match 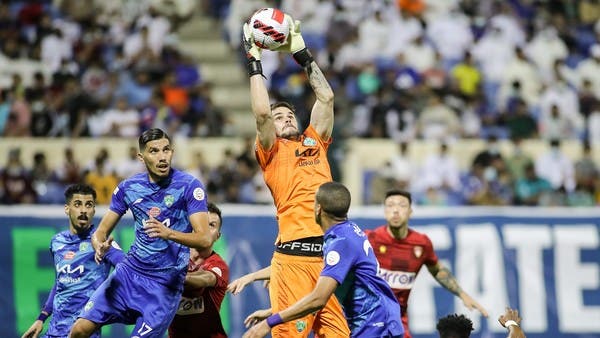 Damak imposed an exciting draw against its host Al-Fateh, 5-5, in a marathon match hosted by Prince Abdullah bin Jalawi Stadium in Al-Ahsa, at the opening of the 13th stage of the Mohammed bin Salman Professional Cup, on Thursday.

The match witnessed great excitement since its inception, as Al-Fateh scored the first goal after 3 minutes through its Peruvian player Cristian Cueva, who received a pass from his colleague Nawaf Al-Bushel and faced the goal and put the ball into the net.

Damak responded quickly, specifically at the 11th minute, when his Algerian striker, Hilal Soudani, scored the equalizer after hitting a powerful ball from outside the penalty area that landed in the net of Ukrainian goalkeeper Maxim Koval.

Damak continued his attack, and his Algerian striker, Hilal Soudani, scored the second goal in the 16th minute, after he took advantage of his Argentine teammate Zelaya’s shot returning from the goalkeeper to put the ball into the net.

Al-Fateh responded quickly, specifically at the 19th minute, when striker Ali Al-Zaqaan scored the equalizer after receiving a pass in front of the goal by his Algerian teammate, Sofiane Ben Debka, to put the ball into the net.

In the last minutes of the first half, Damak intensified his attack, and Brazilian player Felipe Augusto scored the third goal at the 45+4 minute when he hit a powerful ball from outside the penalty area that landed in the Al-Fateh net.

In the second half, Damk continued his advantage, and Croatian player Migo Kaktaş scored the fourth goal in the 63rd minute after receiving a pass from his colleague Abdelilah Al-Bireh to put the ball into the net.

In the last twenty minutes, Al-Fateh imposed its control, and its Croatian player, Ivan Sentini, scored the third goal in the 70th minute, after following up on the shot of his Moroccan colleague, Mourad Batna, returning from the goalkeeper to head it into the net.

Al-Fateh continued its attack, and its Peruvian player Cueva scored the equalizer in the 75th minute through a penalty kick.

Al-Fateh’s attack did not stop, and its striker, Firas Al-Braikan, managed to score the fifth goal at the 76th minute, after he completed the cross of his Moroccan colleague, Mourad Batna, with his foot in the net of Damak.

Damak responded quickly, specifically after 3 minutes of Al-Fateh’s goal, where Argentine striker Zelaya scored the equalizer after receiving a pass from his Algerian teammate Hilal Soudani to set the goal and hit the ball into the net.