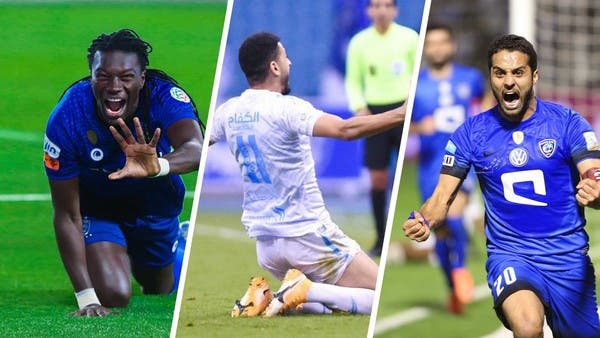 Al-Hilal and Al-Fateh confrontations have always been known to settle the score in the last minutes, and the history of the two teams’ matches witnessed many decisive goals in the killer time.

The Saudi League champion is looking forward to achieving the title for the third time in a row, on Thursday, when it is a heavy guest of Al-Fateh, on the grounds of Prince Abdullah bin Jalawi Sports City, and Al-Hilal is equal with Al-Ittihad with “61 points”, but the blue team leads at the expense of its opponent thanks to The two direct matches (two wins), so the two teams realize that any stumble will destroy their hopes of achieving the title.

Previous meeting between Al-Hilal and Al-Fateh

And it will be an opportunity for Al Hilal to be crowned without waiting until the last stage, if it wins over its sixth host, Al-Fateh, in return for Al-Ittihad’s fall outside its home against the twelfth-placed agreement.

It is known about Al Hilal that he succeeds in turning the result to his advantage and fights to the last, especially in front of Al-Fateh.

The story of the last gasp goals between the two teams in the 2010-2011 professional league began in the match hosted by Al-Fateh at its stadium, when they were tied 1-1, before Majed Al-Murshidi scored the winning goal in the 95th minute in stoppage time, within the week The 18th of the competition, and the goal contributed to Al Hilal winning the title.

On the seventh of August 2012, Congolese striker Doris Salomo gave his team the three points at the expense of Al Hilal in the 2012-2013 season, in the second week of the league, when he scored the first goal in the 41st minute, before Sultan Al-Bishi equalized for the capital team, then returned Salomo and settled the confrontation with a shot in the 86th minute, in the meeting that was held at King Fahd International Stadium, and Al-Fateh was able to achieve a historic achievement at the time and win the league for the first time in its history.

The excitement continued in the two teams’ confrontations in the league in the 2014-2015 season, when they met within the sixth week, when a fatal mistake caused Al Hilal to win, when the result indicated a one-to-one tie until the 85th minute, when Saudi defender Rabih Sufyani wanted to clear a cross. But by mistake, he put it in his team’s net.

Al Hilal celebrates the opposite goal

Defender Abdullah Al-Zouri saved Al-Hilal from losing 3-2 to Al-Fateh, when he scored with a header the equalizer “3-3” in the 93rd minute, in the meeting that brought them together in the 15th round of the league in the 2015-2016 season, and that witnessed that The confrontation was scored by Al-Zouri double and a goal by his colleague Nasser Al-Shamrani, compared to a double by Al-Fateh player Alton Jose and a goal by Juan Falcon.

The fifth meeting, which was decided minutes before the final whistle, was his star Leo Bonatini in the 2016-2017 season in the 8th week, when the Brazilian striker converted the pass of his colleague Salem Al-Dosari in a wonderful way inside the Al-Fateh goalkeeper in the 89th minute, and then he was leading the current Argentine coach Ramon Diaz. Crescent in its first period.

The same scene was repeated between the two teams in the 21st round of the same season, when striker Yasser Al-Qahtani gave his team an important victory in the 97th minute of the match, in a match that saw 6 minutes of lost time, and the decisive goals contributed to awarding the league title to the team known as the blue. and white.

Farah Al-Qahtani with the goal

During the fourth week of the 2018-2019 season, the result of a 2-2 draw was present between the two teams, with the final whistle remaining about a minute and a half after the referee calculated 5 minutes instead of lost time, and playmaker Mohamed Al-Shalhoub managed to play a long ball for his colleague Gilmin Rivas and put the Venezuelan striker in front of The player, who scored 13 goals for the capital team in 41 matches, managed to put the ball in the opening net and snatch the victory.

Although the match was held behind closed doors due to the restrictions of the Corona virus, the ninth week of the meeting between the two teams in the 2019-2020 season was full of excitement and the result was not decided until the deadly time, as usual for the two teams.

Marwan Saadan (8th d) advanced to Al-Fateh through a penalty kick, and Saleh Al-Shehri equalized for Al-Hilal (22nd). Carlos Eduardo added the second goal 12 minutes later, and in the second half, Michel T. Freddy returned the opening to the match with a equalizer (d.77), and gave him the lead again two minutes before the end of the original time of the meeting.

Gomez during a penalty kick in front of Al-Fateh

However, a penalty kick in the last seconds of stoppage time awarded Al Hilal the equalizer through French striker Bafetimbi Gomez.

The same scene was repeated in the second round meeting between the two teams, by the same French striker, when the result indicated a 1-1 draw, until the 87th minute when Gomez successfully put the ball into the Al-Fateh net, giving his team the three points, in a match that saw him score three goals, two goals. In the interest of Al-Hilal by two penalty kicks, and another by an own goal. In the same season, Al Hilal won the title.

Al-Fateh kidnapped last December and during the 14th week of the league competitions this season, three points from Al-Hilal on the latter’s ground and stadium, through a penalty kick by Moroccan Mourad Batna, successfully in the 87th minute, which contributed to Al-Fateh’s 3-2 victory.

Patna after his goal in Al Hilal

And on Thursday evening, the two teams will be on a date with another important meeting for Al Hilal, as it can decide the title in the event of its victory over Al-Fateh and the fall of its rival Al-Ittihad.