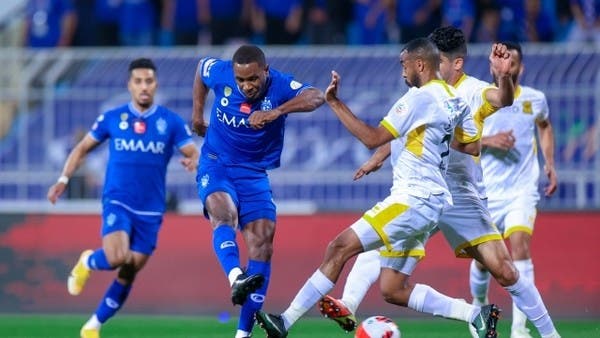 The Mohammed bin Salman Professional League League will place two copies of the championship cup in the cities of Riyadh and Jeddah at the same time, in anticipation of any scenario in the last round of the exciting season on Monday, with Al Hilal and Ittihad Jeddah tied on points.

Al Hilal outperforms Al Ittihad, which lost the lead in the last rounds, after it was ahead by a large margin.

Al-Hilal needs to beat its guest Al-Faisaly in Riyadh to win the title for the third time in a row, without looking at the result of Jeddah’s union with Al-Batin in Jeddah.

Al-Hilal’s task will not be easy in the absence of the two main defenders, Ali Al-Bilahi and Jang Hyun-soo, along with midfielder Gustavo Cuellar, who is suspended, and his rival Al-Faisaly is facing the threat of relegation and will need a positive result.

History is not always biased towards Al Hilal when deciding the title is postponed to the last round.

Al-Hilal lost the title twice on the last day, the first in the 2008-2009 season, the first in the professional era, when Al-Ittihad achieved its last title in the competition, and in 2018-2019 in favor of Al-Nasr.

Ittihad Jeddah will need a gift from Al-Faisaly, with the victory over Al-Batin, which is also threatened with relegation.

It seemed that Al Ittihad of Jeddah was taking steady steps towards its first title since 2009, but it achieved one victory in the last four matches, while Al Hilal achieved five consecutive victories, continuing its revival since the arrival of coach Ramon Diaz after he was far from the title race.

Argentine Diaz said: We deserve to win the title and we will not waste our chance, we were 16 points behind the lead and now we control our destiny.

Ittihad Jeddah was affected by the suspension of the season for a long time due to the AFC Champions League, which it does not participate in this season, in addition to injuries, and the most prominent absentee was the Egyptian defender Ahmed Hegazy, who returned to play recently.

Ittihad Jeddah would officially lose the title in the previous round, but turned its delay into an exciting 3-1 victory over Al-Ittifaq in the last minutes to hold on to a glimmer of hope.

Hegazy said: We have to fight until the last moment, we have the desire since the beginning of the season, but we were exposed to difficult circumstances and we want the fans to be proud of us and to be proud of ourselves.