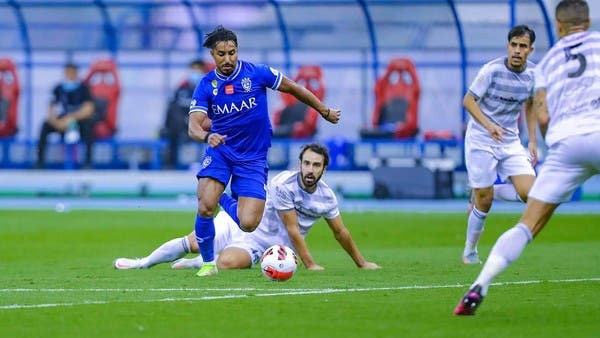 Al-Hilal seeks to continue its victories and pursue the leading teams when it is a heavy guest on Al-Taie, in the confrontation hosted by Prince Abdulaziz bin Musaed Stadium in Hail, while Al-Ahly Jeddah is looking for healing its wounds when it faces its host Al-Faisaly, at the end of the 16th stage of the Mohammed bin Salman Professional Cup on Sunday. Monday.

And at Prince Abdulaziz bin Musaed City Stadium in Hail, Al Hilal seeks to continue its victories when it comes as a heavy guest on Al-Tai.

Al-Hilal managed to restore its balance after a series of negative results in its last 4 matches in the league, when it defeated its host Al-Faisaly 3-2.

Al-Hilal coach Leonardo Jardim hopes that his team will continue the good run it made last week, when it succeeded in achieving two victories over Al-Faisaly 3-2, in the league and in the Super Cup final, which Al-Azraq crowned last Thursday.

Al Hilal enters the match while it is in fifth place with 24 points, 11 points behind the leaders Al Ittihad Jeddah, which it will face in a postponed match.

On the other hand, Al-Taie is looking forward to continuing his strong performances in his last 3 matches, which he won over Al-Nasr, Al-Faisaly and Al-Hazm, to move away from the danger zones, as he advanced to eighth place with 19 points.

Al-Faisaly and my family in Jeddah

At King Salman City Stadium in Al-Majma’ah, the people of Jeddah are looking forward to healing his wounds and moving away from danger zones when he faces his wounded host, Al-Faisali.

Al-Ahly performed poorly in the first round, which ended in 13th place with 15 points, with a goal difference from Al-Batin, who finished second to last.

Al-Ahly is experiencing a bad period, as the team lost the last 4 matches against Abha, Al-Nasr, Al-Raed and Al-Shabab.

On the other hand, Al-Faisaly’s situation is not much different from Al-Ahly’s, as the team performed poorly in the first round, as it occupies 14th place with a goal difference from Al-Ahly.

Al-Faisaly did not know the taste of victories in the last 4 matches, as he lost 3 matches and drew one, in addition to losing the Super Cup to Al-Hilal, who defeated him 3-2 in the league.