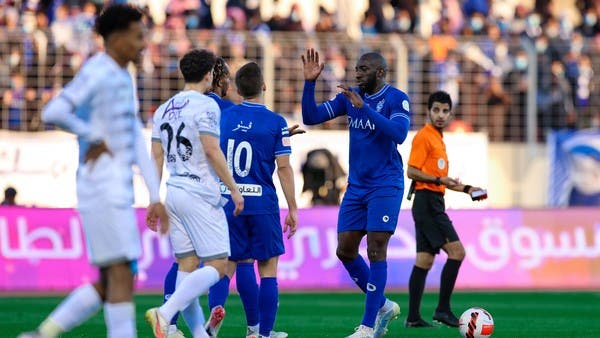 Al-Hilal continued its series of victories after it swept its host Al-Taei 4-0, in the confrontation hosted by Prince Abdulaziz bin Musaed Stadium in Hail, in the 16th stage of the Mohammed bin Salman Professional Cup, on Tuesday.

Al Hilal managed to get out of the negative results tunnel by achieving its third victory in a row, as it defeated Al-Faisaly in the League and the Super Cup last week.

The match witnessed an advantage for Al Hilal, who performed well and needed only two minutes until his Korean defender Jang Hyun Soo was able to open the scoring.

Al Hilal continued its attack and Malian striker Moussa Marega scored the second goal at the 18th minute after receiving a pass from his Argentine teammate Luciano Vieto to face the goal and put the ball into the net.

In the second half, Al Hilal continued its advantage, and its defender, Madalla Al Olayan, managed to score the third goal at the 54th minute, after he skillfully penetrated Al Taei’s defense and hit the ball into the net.

And at the 71st minute, Malian Moussa Marega finished the goals by scoring the fourth goal after receiving a pass from Argentine Vieto to hit the ball powerfully into Al-Taei’s net.

With this result, Al Hilal’s balance rose to 27 points to advance to fourth place, 8 points behind the leaders Al Ittihad Jeddah, and Al Taei stayed on its previous score of 19 points to remain in ninth place.