Al-Houthi’s loyalty to Qassem Soleimani extends to sports.. T-shirts with his picture on it 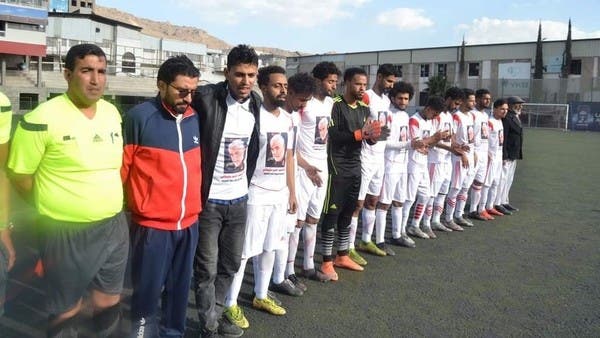 In a flagrant violation of sports laws, the leaders of the Houthi militia forced the players of Al-Shaab and Al-Ahly Clubs to wear T-shirts with pictures of the terrorist Quds Force commander Qassem Soleimani, in a tournament that the militia invented for Soleimani on the anniversary of his killing.

A prominent military commander in Iran said months ago that his country had 6 armies outside its borders that work for it and defend it. Ali Ghulam Rashid, the commander of what is known as “the headquarters of Khatam al-Anbiya,” confirmed in statements that Qassem Soleimani, the former commander of the Quds Force, revealed, three months before his death, that he had organized 6 armies outside Iranian territory with the support of the Guard Command and the Army’s General Staff. He admitted that these armies have ideological tendencies, and their mission is to defend Tehran against any attack, according to his claim.

He pointed out that among those armies are the Lebanese Hezbollah, the Hamas and Jihad movements, the regime forces in Syria, the Popular Mobilization Forces in Iraq, and the Houthi militia in Yemen, stressing that these forces represent a deterrent force for his country.

Two years have passed since Soleimani was killed, by an American strike near Baghdad International Airport on January 3, 2020.

New information revealed that 3 teams of US forces that were present in Iraq at the time, monitored the place from hidden locations at Baghdad International Airport, waiting for the target, Qassem Soleimani, who was the most powerful military commander in Iran at the time.

She explained that elements of those teams were disguised as maintenance workers, while others hid in old buildings or vehicles on the side of the road, according to a report published by Yahoo News.

It is noteworthy that Soleimani was assassinated by an American strike, targeting a car he was traveling with, Abu Mahdi Al-Muhandis, the deputy head of the Popular Mobilization Authority, in the vicinity of Baghdad Airport, after his plane landed coming from Syria.