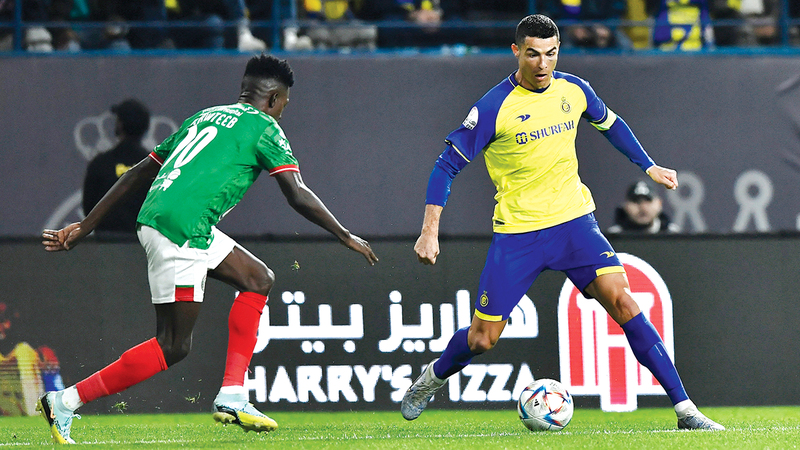 Veteran Portuguese star Cristiano Ronaldo is going through his first serious test with Al-Nasr Saudi Arabia since his arrival last month with a fictional deal, when he meets Al-Ittihad today in the Saudi Super Cup semi-finals, while Al-Hilal faces Al-Fayha in the second semi-final.

And Al-Nassr had won the first official appearance of the best player in the world five times, a few days ago, against Al-Ettifaq with a single goal, which kept him at the top of the Saudi League, a point behind Al-Hilal. The Saudi Super Cup system has changed in the past years, with the participation of four clubs.

Al-Nasr and Al-Ittihad met this season in the local league, and the match that witnessed the expulsion of a player from each team ended in a goalless draw, knowing that Al-Ittihad won back and forth last season (3-1 and 3-0).

Ronaldo desperately wants to score his first goals with Al-Nasr, since his record transfer deal, which international media reported amounting to 400 million euros for two years.

Ronaldo appeared for the first time with the Al-Nasr and Al-Hilal Stars team in the Riyadh season match and scored two goals against Saint-Germain of France, but in the first meeting with the victory shirt he did not score a few days ago, and the “global” is waiting for him to score today in an important match, and the meeting is considered a kind of revenge. Al-Nassr against his former striker, Moroccan Hamdallah, whose transfer from Al-Nasr to Al-Ittihad was accompanied by great controversy.

The two teams are experiencing a distinguished season, as each of them suffered only one loss, similar to Al-Hilal.

Al-Ittihad is currently ranked third in the league, two points behind Al-Nassr, after 14 matches.

The match will witness the participation of distinguished stars, such as Hamdallah, the Brazilians Romarinho, Igor and Marcelo, the Egyptians Tariq Hamed and Ahmed Hegazy in Al-Ittihad, Ronaldo and the Brazilians Talisca, Gustavo and Argentine goalkeeper Agustin Rossi.

• Al-Nasr and Al-Ittihad suffered only one loss during the current season, similar to Al-Hilal.