Al Jazeera is “the pride of Abu Dhabi.” Al Ain is in crisis, and foreigners in Sharjah are “super.” 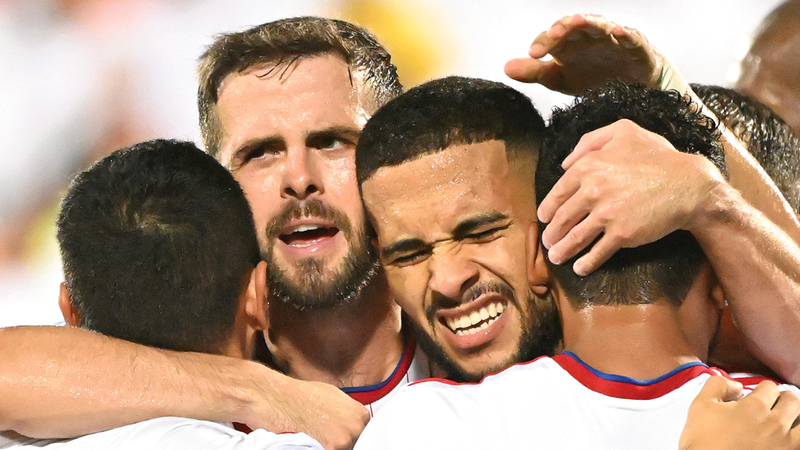 Sharjah and Al Jazeera have proven that they are the most ready to compete for the ADNOC Professional Football League title from the beginning, especially with the fall of the competitors and the widening of the difference from the first three rounds, which is what happened with the “title holder” Al Ain team, which is currently five points away from the lead captured by Sharjah and Al Jazeera By nine points.

Sharjah may have underestimated the Ajman team at the beginning of the two teams’ match in the third round. He should be praised and he will be a difficult figure in the tournament thanks to the attacking four.

As for Al-Jazira, it was the most deserving of the victory over Al-Ain, and the most prepared for the match, whether on the mental or physical level, as Al-Ain appeared abnormally in the match, and a lack of focus appeared in many of the cut passes, while Al-Jazira did not give Al-Ain players the opportunity to own the ball, by Constant pressure, to finally achieve a deserved victory.

Al-Ahly youth succeeded in achieving more than one gain in the Al-Wahda match, as the team proved that it was able to win against the opposing team, and got rid of a big knot against Al-Wahda, by not winning in eight previous consecutive matches, and its Brazilian striker Igor Jesus returned to score, and the Syrian Omar opened Khribin’s scoring record with a goal against his previous team, are all positive things in the interest of Al-Ahly youth for sure.

And it seems that the Al-Bataeh team wants to write a new story for a newly emerging team, after beating the ineffective Baniyas so far, and collecting six points in the first three rounds, results that big teams such as Al-Ain, Al-Wasl, Al-Wahda and Al-Nasr did not achieve, so that the Brazilian coach Caio confirms his success in the league. with any team.

Al-Wasl returned to anger its fans by losing two points that were naturally within reach against Dibba Al-Fujairah, who lost the first two matches, and he is a newly promoted, but this did not happen, and Al-Wasl almost lost the match as well, had it not been for a penalty kick by the Brazilian Lima.

Al-Nasr repeated the same scenario by losing two points against the owner of the land, the Khorfakkan team, so that the team draws a repeated scenario every year, and the loss of the opportunity to compete for a lost title, and on the other hand, and so far it seems that the Al Dhafra team is the most unconvincing team at the level among our league teams.

“Emirates Today” monitored the opinions of the audience with a question via the social networking site “Twitter” about the level of the Al-Wahda team: “We shared our opinion… after three rounds of the launch of the ADNOC Professional League… How do you see the level of unity and its ability to compete for the league title?” 3 options were put in place: completely far from the competition, he will come back strong after stopping, he needs national players, the striker Kharbin lost.

And 65.5% of the audience (94 participants) confirmed that Al-Wahda is completely far from competition this season, while 13.1% stressed that the team will return strongly after stopping, and need citizen players, and 8.3% confirmed that the reason is due to the loss of striker Omar Khribin.

For his part, technical analyst Khaled Obaid confirmed that the third round witnessed a distinguished level in the two matches of the week, which are Al-Jazira and Al-Ain and Shabab Al-Ahly with Al-Wahda. The two most convincing and entertaining teams so far in the championship matches.

Khaled Obaid told “Emirates Today”: “The Al Ain team is facing a real crisis this season, and its performance worries its fans, not this team that started last season strongly, and a lack of focus appeared on the team at the top of the island, which was the best and most possessive and controlling the match, and presented All football arts, thanks to the brilliance of Ali Mabkhout and his colleagues, but Al-Ain deserved to lose, and the team must review itself.”

He added: “Victory is nothing new in front of Khorfakkan, the same performance, the same names, and the way of playing like previous seasons, and in Al-Wasl the team will suffer greatly from the ineffectiveness of Amouri’s real, in addition to the weakness of the parties, and their failure to play their role, which affected the team, while Al-Bataeh presents a historical season. And if he succeeds in obtaining the points of the Al-Wasl match, he will have achieved three victories and a full mark.”

To see the top scorers, the standings of the teams and the results of Round 3, Please click on this link.