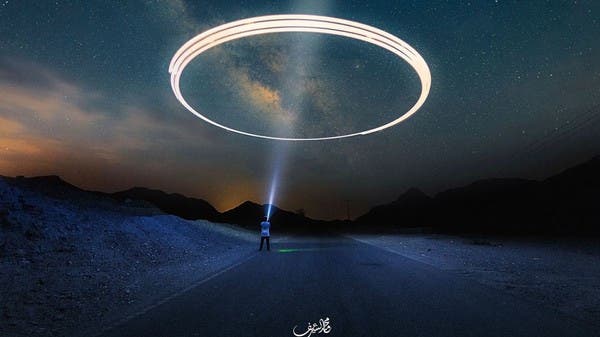 After waiting for more than 4 hours to follow the movement of the galaxy and the space planets, the photojournalist Mohammed Al-Sharif was able to achieve his creative idea in photographing the “Wadi Abu Al-Ajaj” area east of Al-Wajh Governorate of the Tabuk region, which is always characterized by the presence of galaxies.

Al-Sharif documented the image of the “galaxy” capture with the light movement of the “drone”.

This image was able to achieve wide media echoes after it won first place in the competition of the Federation of Arab News Agencies for the best report and the best image, which was approved by the Federation annually, in order to encourage distinguished journalistic work among the member agencies, where the photographer of the Saudi News Agency in Tabuk region Muhammad Al-Sharif won an award Union for the best picture of the year 2021 for his picture (painting with light).

In an interview with “Al Arabiya.net” with the photographer Muhammad Al-Sharif, he confirmed that the image was the product of his idea of ​​​​photographing with light, a method by which a shutter speed of no less than 10 seconds is chosen so that the camera can record the movement of the lines of light drawn with the lights of the searchlight. Use the light wings of the “Dron” aircraft, and to show the “Milky Way”.

Regarding his feelings of winning, he stressed his happiness with this nomination from the Saudi Press Agency, with the participation of 18 Arab news agencies in this competition, and achieving the best image, indicating that the distinction came at the level of the Arab world and not at the level of the Kingdom, and this achievement is attributed to his country and not to his person.

Al-Sharif also revealed his excellence in working as a photographer and reporter for Al-Wajh Governorate, which is affiliated with the Tabuk region. He began practicing photography since 2007, and he also practiced aerial photography in 2016.

It is noteworthy that the honoring of Al-Sharif came during the opening yesterday evening by His Excellency the Minister of Information in charge and Chairman of the Board of Directors of the Saudi News Agency, Dr. Majid bin Abdullah Al-Qasabi, the work of the 48th General Assembly of the Federation of Arab News Agencies “Fana”, hosted by “SPA” at the Palace of Culture in Riyadh. In the presence of a number of officials and members of the diplomatic corps accredited to the Kingdom, and heads of agencies members of the Federation.