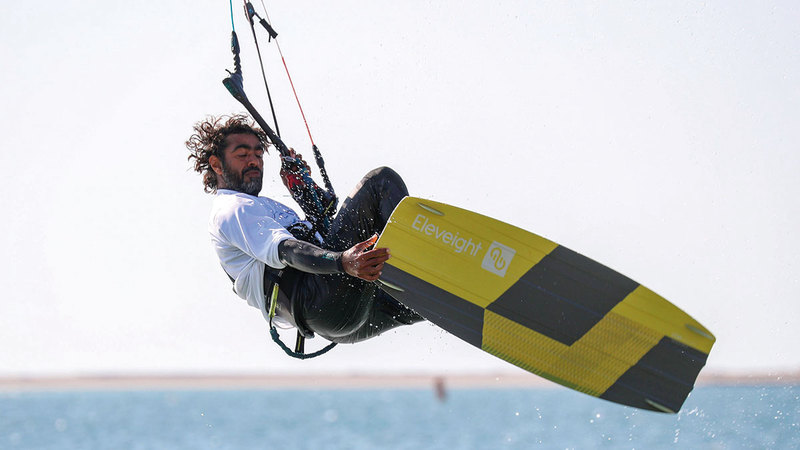 The Dubai International Marine Club organized the sixth edition of the Dubai Open Championship for surfing on parachutes (Kitesurf) under the supervision of the Emirates Sailing and Modern Rowing Federation, and in cooperation with the Emirates Kiteboarding, Rowing and Water Skiing Committee, where the competitions included 12 diverse categories in four competitions: Twin Tip, Free Show and Hydrofoil, in addition to Winning Foil, which was held for the first time.

Muhammad Al-Mansoori grabbed the spotlight from everyone after he snatched three colored medals: two golds and a bronze, where he won first place in the “free show”, beating the two champions Ghaith Al-Marri (the second) and the contestant Salem Al-Suwaidi (the third). Al-Mansoori also won the gold medal in the (Twin Tip) competition, ahead of Rashid Al Falasi (second) and Ghaith Al Marri (third).

The Emirati champion Abdulaziz Al-Marzouqi succeeded in winning the title of the hydrofoil category, ahead of Ghaith Al-Marri (second) and Mohammed Al-Mansouri (third).

The winners were crowned by: Khalid bin Dasmal, a member of the Board of Directors of the Dubai International Marine Sports Club, and the Executive Director, Muhammad Al-Falahi, accompanied by the head of the Maritime Rescue Department in the Dubai Police, Lieutenant Colonel Ali Al-Naqbi, the Director of the Sports Affairs Department, Muhammad Al-Marri, and the Secretary-General of the Emirates Sailing and Modern Rowing Federation, Muhammad Al-Obaidli. Ali Al Nuaimi, Director of Waterways and Security Department at Nakheel Company.