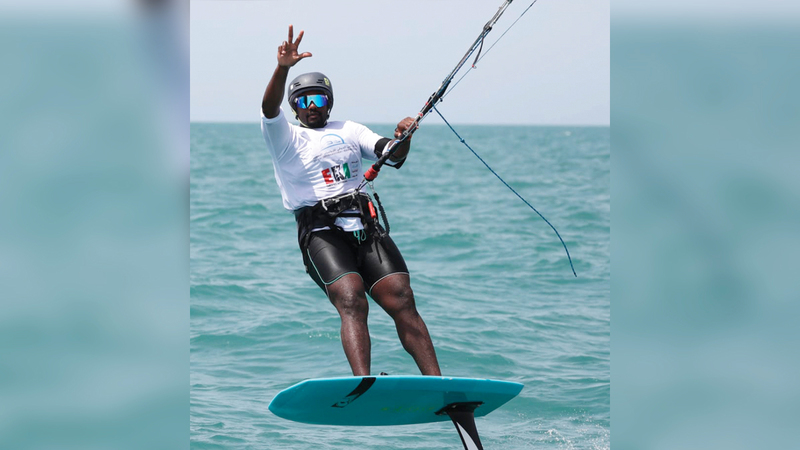 The big event, which lasted for two days (the day before yesterday and yesterday), was organized by the Dubai International Marine Club as part of the marine contexts calendar for the current sports season 2021-2022, in cooperation with the Dubai Beach Boat Club – DUSC.

A press release said: “The contestant, Suhail Al-Marri, one of the stars of this sport, was keen to take on the challenge with the experienced and experienced participants, including the Bulgarian Alexander Bashel.”

Suhail Al-Marri, a lover of the sea, Al-Wasl Club, and (formerly) basketball player said that he started practicing Kite Surf since 2017 as an amateur, and then became keen to practice it on a daily basis and was encouraged by the availability of all its ingredients on the beaches of the country, in addition to the presence of an elite group of friends and young people who excelled in it. One of the stars of our national team.

He added: “The Emirates Committee for Kite Surf, Rowing and Surfing, headed by Sheikh Ahmed bin Hamdan Al Nahyan, played an active role in its dissemination, and increased interest from marine clubs in the country, including the Dubai International Marine Sports Club in expanding its base, and thanks to the professionalism in the organization we are gaining Experience and distinction day after day in light of the participation of professionals and classifiers who are keen to come to the country to participate in events and training as well.

Al-Marri said that he aspires to go far in this sport, which will appear for the first time in the Summer Olympics scheduled in the French capital, Paris in 2024, after it was recognized by the sports family as a real game that develops the mind and body, and fly away with it.