Al-Nasr Club is looking to transform into a sports city 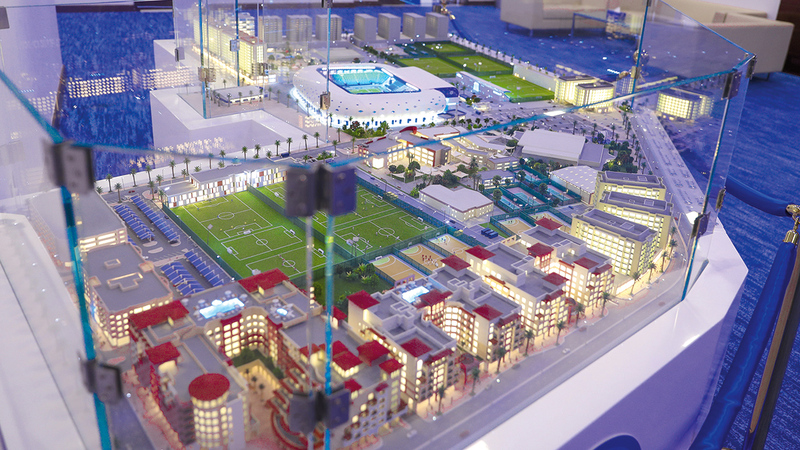 The head of the investment company in Al Nasr Club, Mansour Al Falasi, revealed that the club is looking to transform into an integrated sports city in the center of Dubai, with its sports, residential, commercial and educational capabilities in one area. During a press meeting held at the club, Al Falasi shed light on the investment portfolio of Al-Nasr, and the current and future projects of Al-Ameed, including a group of residential and commercial towers located in the Oud Metha area, which is managed by a real estate company, and brings the club about 112 million dirhams annually.

Regarding the club’s real estate projects, he said: “Among them are the (Taghruda) building, and (Al-Nasr Square), which includes 398 apartments, 28 shops, and (Al-Nasr Central), which contains 116 apartments. The number of residential buildings inside the club’s headquarters reaches 11 buildings, with 500 apartments and more than 86 shops, which are managed by the global real estate company (Harbor).

Al Falasi confirmed that “the (Al Khawaneej Mall) project is still under study, in addition to other projects, including three projects for which the imaginary design has been prepared,” pointing to the increase in revenues on the club’s assets this season by 59%, and the increase in rental income by 159%, which This confirms the club’s success in benefiting from the large infrastructure that it owns, and the correctness of the approach adopted in the management of its assets.

Al-Nasr Club seeks to develop the level of investment, in order to achieve the great ambitions that the club seeks. The head of the investment company in Al-Nasr Club continued: “We can achieve many profits, given that the name of Al-Nasr Club is well-known, a distinctive mark, and has a large fan base. Marketing is one of the important aspects that support the work process in any club, as the club’s management is interested in this aspect and confirms its positive activation.

Mansour Al Falasi revealed the official signing with the Japanese national team to set up its training camp and training before the 2022 World Cup at Al Maktoum Stadium. And a number of Asian teams, which guarantees a large marketing income for the club during the preparations for the 2022 World Cup. He said: “The signing with Japan came due to the team’s participation in the 2019 Asian Cup matches, which were held in the UAE at Al Maktoum Stadium, and the attention, care and quality of facilities it found. I contributed to his coming back to the Emirates.”

The increase in revenues on the assets of Al-Nasr Club amounted to 59%.