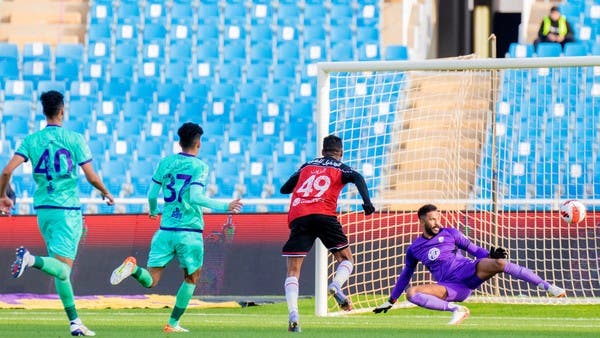 Al-Ahly Jeddah continued its series of losses after receiving the third defeat in a row against its leading host with a clean goal on Monday in the confrontation, which was hosted by King Abdullah City Stadium in Al-Qassim, in the 14th stage of the Mohammed bin Salman Professional Cup League.

Al-Ahly continued to decline in its results after receiving its third loss in a row, as it lost its previous two matches against Al-Nasr and Abha to approach the danger zone.

Al-Raed performed well, especially in the first half, as he scored the game’s only goal in the 17th minute through his player Ahmed El-Zein.

Al-Raed continued his attack, and his Moroccan striker Karim El-Barkaoui had a real chance, who received a pass from his compatriot Mohamed Faouzir to hit the ball strong, but it hit the post.

In the second half, Al-Ahly tried to return to the match, and its coach made two early changes by entering the Croatian Philip Bradaric and Muhammad Majrashi in the place of the duo, Noah Al-Musa and Abdelbaset Hindi.

The changes made by Al-Ahly coach Bensik Hasi, who is going through a difficult period with his team after his results deteriorated this season, did not work.

With this result, Al-Raed’s balance rose to 21 points to advance to sixth place, with a goal difference from Al-Hilal, the fifth, and Al-Ahly remained on its previous score of 15 points, dropping to 11th place, 4 points behind Al-Hazm and Al-Taawun.