Al-Ruwaihi scores an unprecedented “clean chit” in the “amateur” league 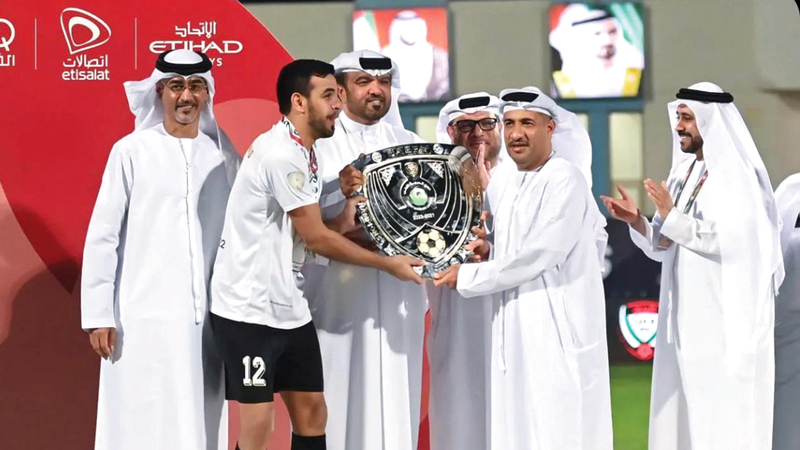 Dibba Al-Fujairah goalkeeper, Muhammad Al-Ruwaihi, contributed strongly to crowning his team the first-class football champion, and ascending to the ADNOC Professional League, starting next season, after keeping a clean sheet in 18 games last season, including in 15 matches in the league championship, And three in the preliminary round of the President’s Cup.

Al-Ruwaihi told “Emirates Today”: “It is a new number in the Emirati stadiums at the level of the first division, and perhaps in the professional league, for a goalkeeper to keep a clean sheet in 18 games during one season.”

He explained, “I was close to keeping a clean sheet in five consecutive matches, after keeping it in four consecutive games, but in both cases I conceded a goal that missed me completely and I did not feel completely happy at that time, but I was certainly happy because the team won the points in these two matches.”

He continued, “I am happy with winning the shield and the happiness of the fans, and I aspire to add it to my football record next season in the ADNOC Pro League, and I will certainly strive for that.”

Al-Ruwaihi said: “The current Olympic team goalkeeper coach, Youssef Al-Mansoori, (he trained him when he was with Al-Nawakhada last season), encouraged me with such ambition, as he told me on more than one occasion that I should be the most goalkeeper who works (clean sheet) in the league, And actually last season I was the most goalkeeper (Clean Chet), and this season as well, and for this purpose I was always in constant contact with him and listened to his advice.”

He added: “We pledged at the beginning of the season between us as players to achieve the goal of ascension, and thank God and with the efforts of everyone we achieved our goal after a difficult and long season, and we dedicate this achievement and shield to His Highness Sheikh Hamad bin Mohammed Al Sharqi, Member of the Supreme Council and Ruler of Fujairah, and His Highness warmed the hearts of all the people of Dibba With the new stadium and the architectural masterpiece, and to His Highness Sheikh Mohammed bin Hamad Al Sharqi, Crown Prince of Fujairah, and Sheikh Saleh bin Mohammed Al Sharqi, Head of the Department of Industry and Economy in Fujairah, for unlimited support.”

Regarding the most difficult match he played with “Al-Nawakhatha” this season, Al-Ruwaihi said that “it was against Dibba Al-Hisn in the first round of the championship, despite winning a clean double, in which I saved many balls,” while he sees that the most beautiful goal scored last season came by the feet of his colleague. In the team, the Brazilian player Diego da Silva in the Al Arabi goal.

Al-Ruwaihi confirmed that the best defensive line consisted of Khaled Abdullah, Rashid Mohammed, the Brazilian Roger and Hazaa Salem, noting that he was comfortable playing alongside all players, but the technical stability made him close to this quartet.

• “We pledged at the beginning of the season to rise, and it was achieved with the efforts of everyone after a difficult and long season.”