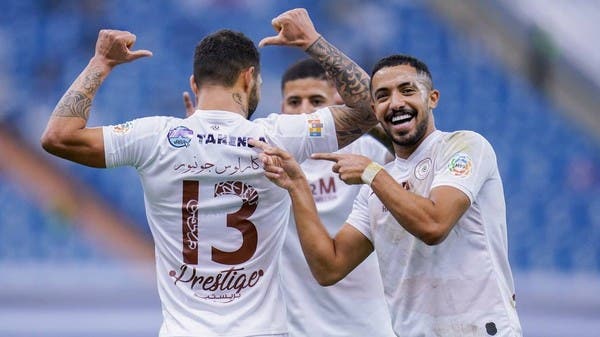 Al-Shabab regained the tone of victories after sweeping its guest Al-Raed 3-0, to take the lead temporarily, in the confrontation hosted by King Fahd International Stadium in the capital, Riyadh, in the 13th stage of the Mohammed bin Salman Professional Cup League.

Al Shabab succeeded in restoring the tone of the victories that had stopped in the last stage, after they drew with their host Al Faisaly negatively.

Al Shabab continued their outstanding results at home, as they did not know the taste of losing in the 7 matches that were held at their stadium.

The match witnessed an advantage for Al Shabab, who took control early and ended the first half ahead with the goal of defender Mutaib Al Harbi in the 19th minute, after receiving a pass from his colleague Hattan Bahbri to be unique in the goal and put the ball into the net.

In the second half, Al-Shabab continued to dominate and scored only two goals, while its players missed a large number of opportunities.

And in the 55th minute, Argentine youth captain Ever Banega managed to consolidate his team’s progress by scoring the second goal after receiving a pass from his colleague Hattan Bahbri to face the goal and put the ball into the net.

Al-Shabab intensified their attack, and Brazilian player Carlos Junior concluded the goals by scoring the third goal at the 72nd minute after receiving a unique pass from his colleague Hattan Bahbri to set the goal apart and hit the ball past Spanish goalkeeper Yago Herren.

With this result, Al Shabab’s balance rose to 25 points, to lead the standings temporarily, with a goal difference from Damak, the second-placed temporarily.