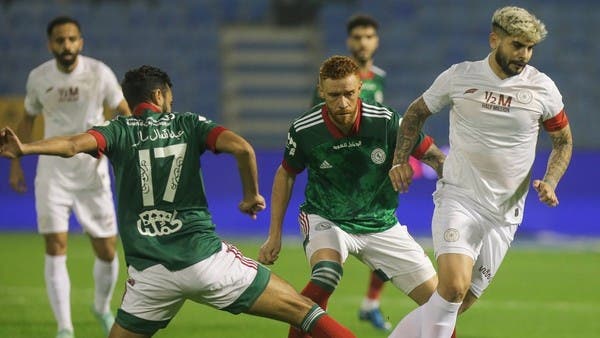 Al-Shabab continued to stumble after drawing in its second match in a row against its host Al-Ettifaq 2-2, in the confrontation hosted by Prince Mohammed bin Fahd Stadium in Dammam, in the 17th stage of the Mohammed bin Salman Professional Cup League.

Al Shabab were close to losing, as they were trailed by two clean goals in the first half, but they managed to adjust the situation in the second half and scored two equalisers.

The two teams shared the advantage, as Al-Ettifaq presented a distinguished show in the first half, and its Brazilian player Sousa scored the first goal in the 33rd minute, when he received a pass from his Moroccan colleague Walid Azzaro to face the goal and put the ball into the net.

Al-Ettifaq continued its attack, and its Slovak defender Philip Kish scored the second goal in the 37th minute, after rising to the cross of his Brazilian teammate Sousa and turning the ball with his head to land in the net of goalkeeper Fawaz Al-Qarni.

In the second half, Al-Shabab imposed its control, and defender Ahmed Sharahili managed to score a goal to reduce the difference in the 60th minute, after turning the pass of his colleague Fawaz Al-Suqur with his foot past goalkeeper Abdullah Al-Owaishir.

Al-Shabab continued their attack, and Brazilian player Carlos Junior managed to score the equalizer in the 64th minute, when he turned his colleague Fawaz Al-Suqur’s cross with a scissor ball into the Al-Ettifaq net.

Al-Shabab intensified their attack, and Nigerian striker Ighalo had a real chance, when he received a cross from his colleague Mutaib Al-Harbi to turn the ball with his foot, but it hit the crossbar.

Before the end of the match, Nigerian striker Ighalo of Al-Shabab missed a goal after receiving a pass in front of the goal by his colleague Fawaz Al-Saqour to hit the ball, but it went outside the net.

With this result, Al-Shabab’s balance rose to 33 points to remain in second place, and Al-Ettifaq’s balance reached 19 points to advance to the ninth place temporarily.