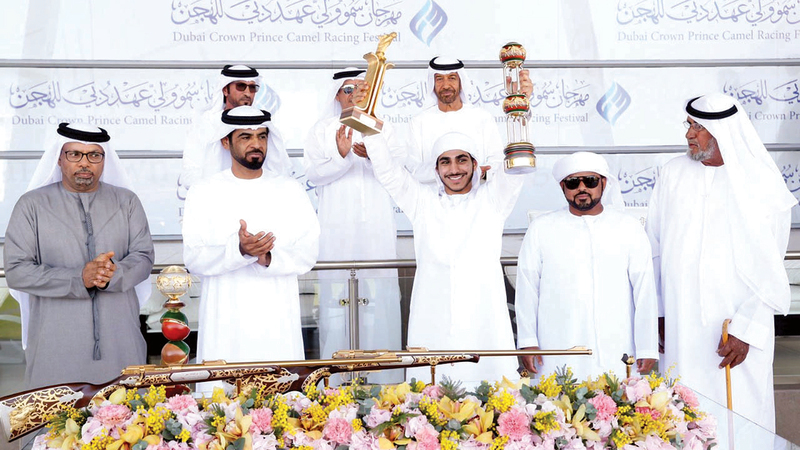 The motto of Muhammad Ali Muhammad Hammad Al Shamsi shone in the challenges of the symbols of the age of folds for the camel of the sons of the tribes within the Dubai Crown Prince Camel Festival 2023.

The slogan of Muhammad Ali Muhammad Hammad Al Shamsi won the Al-Bakr Al-Bakr Open Cup by Alia, who recorded a time of 12:06:1 minutes.

For his part, Margham’s slogan, owned by Hamad Rashid Hamad Ghadeer Al-Ketbi, won the Open Rifle and the Production Cup, after “Muhannad” won the lead, so that Marghem’s slogan got the Open Al-Jadaan Rifle at a time of 12:04:7 minutes, and the same slogan won by « Haqawi” in the Al Thanaiya Al Bakkar Production Cup, with a time of 12:11:1 minutes.

Al-Muheet, owned by Saeed Jaber Abdullah Muhammad, shone after he won the Al-Jadaan Al-Nawaya rifle, reaching the finish line in a time of 12:19:1 minutes. The timing was 12:12:7 minutes. The Executive Director of the Dubai Camel Racing Club, Ali Saeed bin Saroud, honored the winners of the symbols after the end of the seventh round of the evening period. On the other hand, the camel of the tribesmen launched the first challenges of adult age within the Dubai Crown Prince Camel Festival, through 16 runs at the age of two for a distance of eight kilometers, and 10 runs were allocated to production camels. “Amazing” with the slogan Mubarak Sultan Mubarak Al-Rafisa Al-Ketbi achieved the title through the main challenge of the local virgins for production, with a time of 12:28:4 minutes, and “Rahiya”, owned by Ahmed Al-Dahba Aaded Al-Muhairi, shone in the second round of production dedicated to the virgins of hybrids, and achieved a time of 12:33:5 minutes, and he won the lead in the third round for the two local Al-Ja’dan “Raad” owned by Saeed Al-Asri with love Al-Amri, who recorded a time of 12:32:9 minutes, and “Flood” gave the slogan of Ali Saeed Salem Al-Rumaithi the summit of the fourth half of the two-ja’dan Al-Mahajnat, after achieving a time of 12:30:0 minutes.

And achieved the best timing in all the morning runs, “Makhayel” with the slogan of Saeed Manana Ghadeer Ejtbi, who won the top spot in the Al-Bakr Al-Bakr Al-Mahjanat in the tenth game, with a time of 12:21:9 minutes.

On a related level, Al-Marmoum Square is witnessing today the third appearance of the camel of Their Highnesses Sheikhs within the Dubai Crown Prince Camel Festival 2023 through the challenges of the age of the two, which will be held over 14 runs in the morning period, and 13 runs in the evening period, for a distance of eight kilometers.