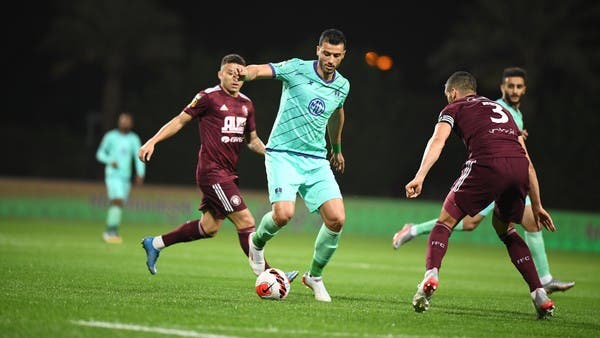 Syrian Omar Al-Soma, Al-Ahly Jeddah striker, saved his team from losing against its host Al-Faisaly, in the confrontation that ended 2-2 and hosted by King Salman City Stadium in Al-Majmaah, at the end of the 16th stage of the Mohammed bin Salman Professional Cup League on Tuesday.

Al-Ahly succeeded in stopping the series of losses that reached four consecutive matches, while Al-Faisaly continued to waste points as he advanced to the last ten minutes.

The two teams shared the advantage, as Al-Faisaly scored the first goal after 10 passes through Dutch player Hisham Faeq. Al-Ahly tried to return quickly, and its player Mohammed Al-Mujahid missed a goal after receiving a pass from his colleague Hussein Al-Maqhawi to face the goal and hit the ball strong, but it found goalkeeper Ahmed Al-Kassar, who narrowly missed it.

Al-Ahly waited until the 45+3 minute, when its Syrian striker, Omar Al-Soma, scored the equalizer through a penalty kick.

In the second half, the performance of Al-Faisaly improved, who imposed his control and intensified his attack. Brazilian player Gilmy scored the second goal in the 55th minute after receiving a pass from his colleague Muhammad Al-Omari to face the goal and hit the ball into the net.

Al-Faisaly continued his attack, and his defender Muhammad Al-Omari almost scored the third goal after receiving a pass from his colleague Muhammad Al-Saiari to face the goal and hit the ball strong, but it found goalkeeper Muhammad Al-Rubaie, who narrowly missed it.

And at the 74th minute, Al-Ahly was forced to complete the match with ten players, after its defender, Mohamed Khabrani, was sent off for obtaining a second yellow card.

The expulsion did not affect the Al-Ahly players, as he imposed his control, and striker Omar Al-Soma managed to score the equalizer in the 81st minute, after turning his colleague Abdul Rahman Gharib’s cross with his foot into Al-Faisaly’s net.

With this result, Al-Ahly’s balance rose to 16 points to remain in 13th place, with a goal difference from Al-Faisaly, the owner of Al-Marker 14.