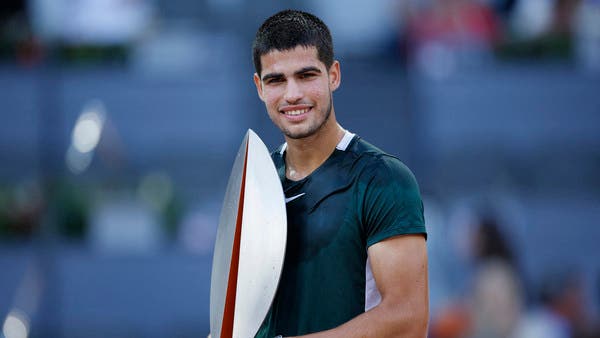 Spain’s youngster Carlos Alcaraz claimed his second Masters title when he defeated defending champion Alexander Zverev 6-3 6-1 in the Madrid Open final in front of his home crowd on Sunday.

The 19-year-old became the youngest player to defeat three of the world’s top five ranked players in a single tournament since the ATP was founded in 1990.

Alcaraz, who won his first Masters title in Miami last month, broke Zverev to lead 4-2 and then easily took the first set.

The Spaniard broke back Zverev without losing a point to take a 2-1 lead in the second set, adding to the frustration of his German opponent, who failed to stop Alcaraz.

With the support of his country’s fans, Alcaraz was able to break his opponent’s serve again to make the score 4-1 and won the next two games to finish the match in about one hour.

Alcaraz impressed the fans at the Manolo Santana stadium with his superb kicks, winning his seventh consecutive victory over a player among the top ten ranked players, and becoming the most decorated player this season with four titles.

Alcaraz will advance to the sixth ranking in the world when the new ranking is issued on Monday, after it was ranked 120th in the world one year ago.