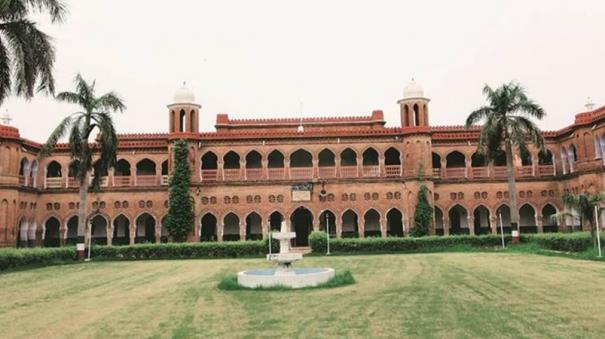 New Delhi: A Tamil Nadu woman has been elected as the President of Aligarh Muslim University Professors Association for the first time. Also, 2 non-Muslim assistant professors have been selected as members.

Aligarh Muslim University is about 150 years old in Aligarh, Uttar Pradesh. In this Central University, a Professors’ Association known as ‘Amuta’ is functioning. About 25 percent of them are women. Even though they vote in the elections, they do not come forward to contest important positions.

In this case, for the first time, a female professor has applied for the post of union president and has been elected unopposed. He is a Tamil Dr. S. Chanthinibee from Salem and a professor of history. Professor Santinibee, who has been working here since the last 2,000 years, has made history twice in Aligarh University.

Professor S. Chanthinibee told the ‘Hindu Tamil’ newspaper about this, “After I became the first executive member of Amuta Sangh, many women are being selected for the post after me. I hope that female professors will compete for important positions such as chairperson from now on. I am happy that all the professors, both male and female, have given me great support,” he said.

All those who competed in the election for 8 executive members have been unanimously elected. Among them are 2 Assistant Professors Yogesh Kumar Yadav (Department of History) and Dr. Karate Pankaj Prakash (College of Dentistry). Like them, non-Muslims have competed in Amuta several times in the past but never won.

Aligarh Muslim University, which has about 47,000 students, was founded in 1875 by the educational reformer Sir Syed Ahmed Khan. Ishwari Prasad Upadhyay was the first student to get a bachelor’s degree. Since then it has been known for religious harmony. It is noteworthy that the university is dominated by Muslim Maulanas.

The election for the posts of Secretary and Assistant Secretary, scheduled to be held today, has been postponed to October 10 due to administrative issues.