Amazing video.. Surgery for a fetus inside his mother’s womb by a Saudi doctor 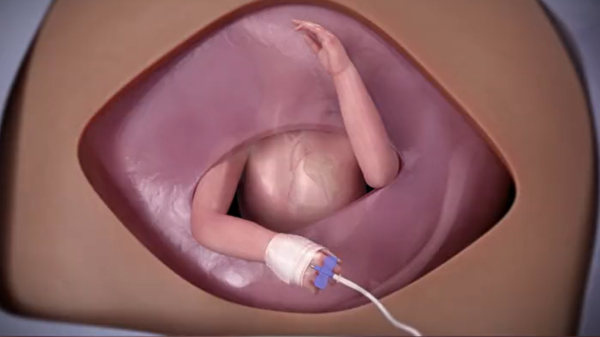 A medical team at Cleveland Medical Center in Ohio, USA, led by Saudi doctor Hani Najm, managed to perform a rare and delicate operation of a fetus inside his mother’s womb.

A video clip published by the Cleveland Medical Center showed a simulation of the surgery conducted by Dr. Hani, who is the head of the cardiac surgery department at the center, and the medical team to remove a cancerous tumor in the heart of a 5-month-old fetus inside his mother’s womb.

For his part, Dr. Hani Negm said, tweeting on his official account on “Twitter”: I am happy that the surgeon was able to remove a cancerous tumor from the heart of a fetus in his mother’s womb, at the age of 5 months, and return the fetus to the uterus, to complete the pregnancy until birth with the fetal surgery team at Cleveland Clinic.

While social media activists interacted with the video of the operation, and scenes of the family after the mother’s birth and the fetus’s exit in good health, expressing their pride and pride in what the Saudi doctor presented, stressing that such distinction is considered a role model for future generations.

The writer and writer Dr. Soraya Al-Areedh tweeted on her official account on “Twitter”, saying: God willing, Dr. Hani Najm, our hearty congratulations, your achievements are outstanding and deserve to be proud of, and we are all proud of you and of them. According to the vision to achieve the amazing results that we look forward to and see them embodied.