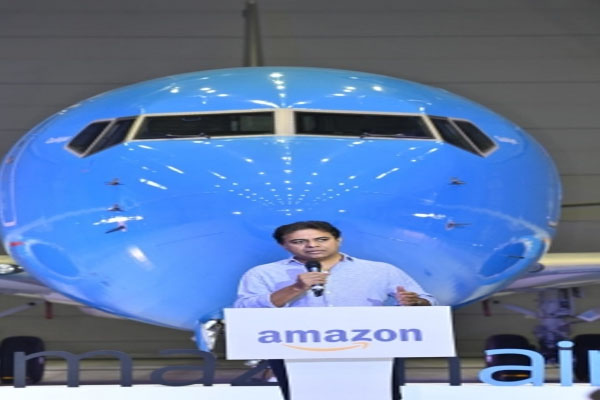 
Hyderabad | E-commerce giant Amazon on Monday launched Amazon Air in India to enhance its transportation network and enable faster delivery to customers in the country.

Amazon will utilize the full cargo capacity of the Boeing 737-800 aircraft which will be operated by Quikjet Cargo Airlines Pvt Ltd.

Amazon is the first e-commerce company in India to partner with third party air carriers to provide a dedicated air cargo network. The company said it reaffirms its long-term commitment to strengthen its transportation infrastructure in India.

Quikjet will use the aircraft to transport Amazon customer shipments to cities such as Hyderabad, Bangalore, Delhi and Mumbai. The launch of Amazon Air in India reinforces the company’s commitment to continue building capacity to meet the needs of its customers and grow its transportation network for faster delivery.

Minister Rama Rao said that Amazon is the first e-commerce company in India to launch a dedicated air cargo network. It chose victorious Telangana to launch Amazon Air outside North America and Europe.

The minister said that Amazon’s love story with Hyderabad continues to grow. He pointed out that Hyderabad is already home to the world’s largest campus of Amazon and the AWS data center has already announced an investment of $4.4 billion by 2030. Amazon’s largest fulfillment center in Asia is also located in Hyderabad.

Rama Rao said that Telangana provides a conducive environment for the development of multi-modal connectivity and Hyderabad has emerged as a major hub for e-commerce distribution and supply chain activities. He added, “We are working towards strengthening the air cargo infrastructure of the state and we welcome the launch of Amazon Air which will help make Hyderabad a cargo hub for the country and generate additional employment in the state. will create opportunities.”

The Minister said that Telangana and Hyderabad continue to be shining beacons in terms of attracting investments. During the last eight years, the state has attracted investments worth $47 billion. This does not include the $2.6 billion committed by the World Economic Forum in Davos last week.