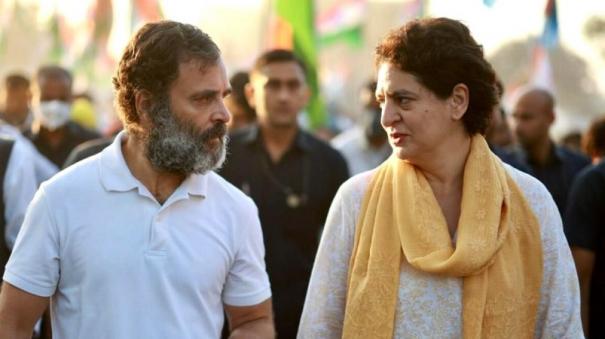 Lonnie: “Ambani and Adani may have bought the leaders and the media in this nation, but they cannot buy my brother,” Congress general secretary Priyanka Gandhi said.

Former Congress president and Lok Sabha member Rahul Gandhi has been conducting the India Unity Yatra since September 7. The Yatra entered Uttar Pradesh today. Priyanka Gandhi welcomed the Yatra in Loni, Uttar Pradesh. Speaking then, he said, “My brother is a fighter. I am proud of him. So far he has completed a 3000 km pilgrimage.

This government spent billions to destroy my brother’s dignity. But they couldn’t do it. My brother walks in the path of truth. All those participating in this yatra, take with you the message of unity, love and respect to all parts of the country.”

Shiv Sena Rajya Sabha MP started the Yatra this morning in Delhi after a gap of 9 days. Priyanka Chaturvedi was also present. He then said that the opposition parties should unite and face the situation.

“Rahul Gandhi is conducting Padayatra to unite the country. There are chances that the Yatra will be successful. I hope that our country will be free from fear from this year 2023. An attempt was made to stop Rahul’s new dynamism in Delhi, which started from Kanyakumari and covered a distance of 2,800 km. But, he defeated it and continued the Yatra successfully. “Rahul Gandhi is going to conduct,” said Shiv Sena’s official magazine Samna, today Shiv Sena Rajya Sabha MP. Priyanka Chaturvedi has also spoken about the unity of the opposition parties.

Earlier, the Congress is trying to field Rahul Gandhi as the prime ministerial candidate in the upcoming 2024 Lok Sabha elections. It is noteworthy that United Janata Dal leader and Bihar Chief Minister Nitish Kumar spoke in support of this.