No Result
View All Result
Latest News
Beyoncé and Jay-Z’s mansion burned down after allegedly arson 27/07/2021
There is no plan to print a new rupee note: Minister Nirmala Sitharaman 27/07/2021
Olympic hockey: Recovering from defeat Indian team: 2nd victory over Spain 27/07/2021
Mishustin inspected the airport complex under construction in Yuzho-Sakhalinsk 27/07/2021
Visakha to Guntur Skating .. This is a world record, innovative 27/07/2021
Next
Prev
Home Sports

America’s women lose for the first time in 45 games 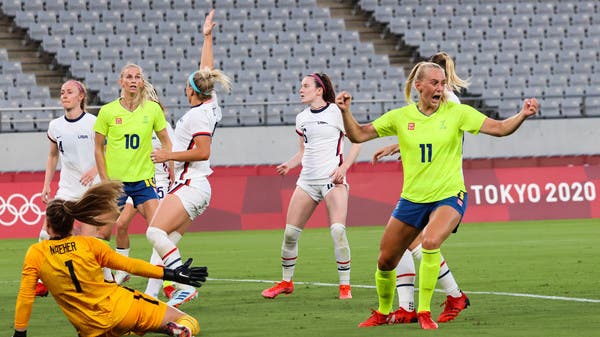 
The United States, the four-time title holder, suffered its first loss in 45 matches, in the women’s football competition at the Summer Olympics in Tokyo, by falling on Wednesday against Sweden 0-3 in the opening group G matches, the first since January 2019, when it fell to France 1 -3 in a friendly match.

It is the United States’ second loss in a 90-minute match at the Olympics, after the opening in 2008 when it came back strong and won gold.

Sweden knocked the US team out of the 2016 Olympics quarter-finals on penalties.

The champion and runner-up of each group and the best two teams occupying third place in the three groups qualify for the quarter-finals.

Russia will resume flights with three countries from August 9

Corona Effect: Postponement of release of another movie .. The movie unit that gave a good message and announced

Feeling the same every time! .. ‘Romantic’ beauty who reveals love for the hero

Barcelona is disappointed .. Neymar took advantage of the negotiations to raise his salary