An Egyptian fan quarrels with Queiroz reveals the details: “He made a mistake in my right and I should have responded.” (Video) 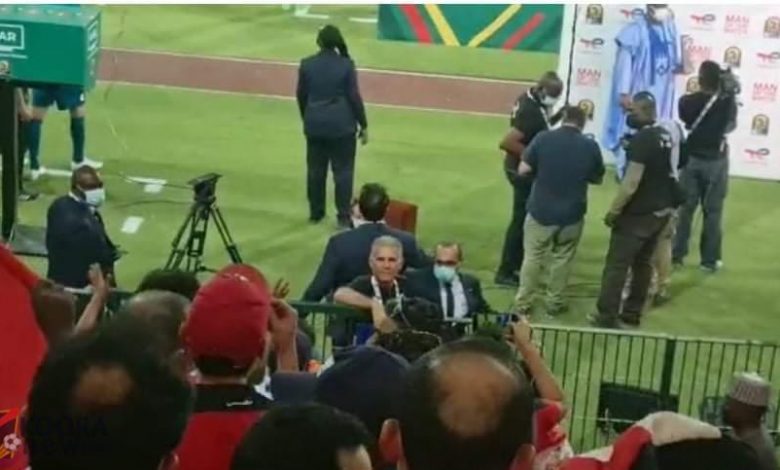 The Egyptian fan, who got into a verbal altercation with the coach of the Egyptian national team, Carlos Queiroz, revealed details of an incident between them after the end of the Egypt-Nigeria match in the opening matches of Group D of the African Nations Cup, which ended with Nigeria winning 1-0.

And the Egyptian fan said in a video clip published by the “kora plus” website: “The mourner was bad, specifically the midfield, and I said to Kierouch after the end of the match that” El-Nani and Hamdi Fathi are not forbidden? So he made a move and made a mistake in my character.. He wanted to get into a quarrel and said, “Come to me, you don’t understand anything.”

He added: “Those who were around me pushed me away, but I should have responded to him, but I did not do so because he is an old man.”

The Portuguese coach, Carlos Queiroz, coach of the Egyptian national team, had entered into a sharp argument with one of the fans who attended the match between Egypt and Nigeria, and the fans blamed Queiroz for the defeat of the Nigerian team, due to the players changing their positions and his reliance on Mohamed Salah as an explicit striker instead of Mustafa Mohamed, who pushed In the position of the right wing, which is not his position, in addition to the poor recruitment of players and the wrong changes.

The Egyptian team lost 1-0 at Ramdy Adjia Stadium in the Cameroonian city of Garoua in the first round of the fourth group matches of the African Nations Championship, which will continue until February 6.

Nigeria topped Group D standings after winning the first three points at the expense of the Pharaohs, while Sudan and Guinea Bissau were in the second and third places equally after a goalless draw, and the Egyptian team remained in last place.

The Egyptian team will play its next match on Saturday against Guinea Bissau, and the Nigerian team will meet with its Sudanese counterpart.

By saying, “Al-Nani and Hamdi Fathi, are they not forbidden? He made a mistake in me and said Almighty Allah to me.”