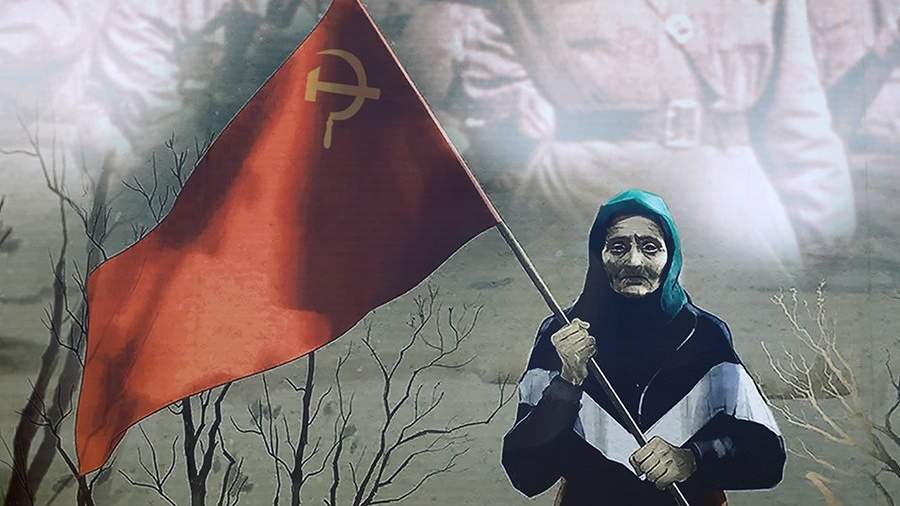 Banners of the heroes of the Great Patriotic War began to be hung on the streets of North and South Ossetia. Thus, a banner with the image of a grandmother holding the Banner of Victory in her hands will be hung in Tskhinval in South Ossetia. On Saturday, May 7, the agency “Res” was informed by the director of the state unitary enterprise “Ir-Design” Roman Kokoev.

Kokoev specified that an eight-meter vertical poster would be hung at the intersection of Isak Kharebov streets. According to him, the banner is planned to be installed on May 8.

On May 6, preparations for the celebration of Victory Day began in Tskhinvali. For example, on Theater Square, public utilities began to install stands and stages. At the same time, a poster with the image of the famous grandmother can be seen at the intersection of Isak Kharebov and Geroev streets.

“On Theater Square, housing office workers are installing stands and a stage. We started work today and since the process is very laborious, the work will be completed tomorrow. On Saturday, employees of the State Unitary Enterprise Ir-Design will start hauling the flags,” Kokoev noted.

On April 7, the story of a grandmother who came out with the Banner of Victory to the soldiers of the Armed Forces of Ukraine, at first mistaking them for Russians, received a response on the Web. After the Ukrainian military took away the banner from her and trampled it, the woman flatly refused the food package they offered, saying that her parents died for the red flag.

After that, an elderly woman with a flag became the hero of numerous street art objects. So, in Voronezh, her sculpture was made by woodcarver Alexander Ivchenko. Artists in Yekaterinburg depicted a Ukrainian grandmother in the form of graffiti. In the Urals, they noted that a woman has become a real symbol of courage and dignity.