An impressive surgery for a fetus in its mother’s womb.. the Saudi doctor tells the details 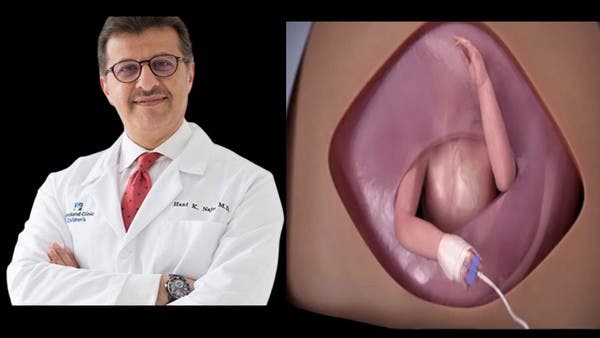 The story was not a fantasy, but rather a fact that the Saudi doctor was able to write in the records of global medical successes, and turn it into a reality, for the whole world to talk about, when Dr. Hani Najm performed a rare and delicate surgery for a fetus inside his mother’s womb, at the Cleveland Medical Center in the state of American Ohio.

A video clip published by the Cleveland Medical Center showed a simulation of the surgery conducted by Dr. Hani, who is the head of the cardiac surgery department at the center, with the participation of the medical team, to remove a cancerous tumor in the heart of a 5-month-old fetus inside his mother’s womb, and the center published the video clip after confirming the success of the operation The baby is born healthy.

Dr. Hani Negm told Al Arabiya.net about the story of his decision to perform the rare surgery to heart a fetus in his mother’s womb. All over the world in general, especially in developed regions, and here congenital heart disease can be detected before birth, and in this case the presence of a tumor attached to the heart was discovered, causing a heart drop in the child.

When Rylan was a 25-week old fetus, doctors discovered a massive tumor on his heart.

Without surgery in the womb to remove it, he would not survive.

Watch how a team of specialists performed the rare and lifesaving procedure. Read more: https://t.co/5l4OlpD2TA pic.twitter.com/rblLa3CIPv

And he continued, “After the disease was discovered in the fetus’s heart and the symptoms of heart failure began, it was noticed that the fetus would not complete the pregnancy, and in this case the patient was transferred to the Cleveland Medical Center for the presence of a full medical team specializing in obstetrics and gynecology, pediatricians and pediatric cardiac surgeons who discussed the case, and the possibility of intervention Surgical, and during this period between transferring the mother to diagnosing the condition, and examining the mother again, I found that the tumor is pressing on the heart and is increasing and hypertrophy, and that there is an increase in heart failure, and it was necessary to make a quick decision to leave the fetus, which may endanger his life Or the operation, and after a meeting of the parties to the team, a decision was taken to perform the operation, and every part of the team was performing its tasks, including the anesthesiologist, obstetrician, and embryologist, and everyone fulfilled their task.”

He also added: “At that time, I performed the surgical intervention and removed the tumor, and at the same moment the heart returned to its normal function, the fluid surrounding the heart was removed, I finished closing the chest, and a nutrient was placed in the fetus’s hand at the beginning of the operation, and after completion, the fetus was returned to the mother’s womb after reassurance. Completely, the heart was restored to normal pumping, and eventually the abdomen was closed, and after four days the mother came out safely to return after the fetus was completed 9 months, to give birth safely after the caesarean section, and now the child is 5 months old, and he is fine and in full health.

for the first time

Regarding the global echoes, he said: “The operation found great echoes of this great event. This is how science advances, and there will be interventions to treat children in the womb in the future, especially congenital malformations that affect the fetus before birth.”

16 years at the National Guard Hospital in Riyadh

Dr. Hani stressed that “the Saudi doctor has made huge leaps and put his name on the list of the best doctors. The skills of the Saudi medical cadres are very advanced and trained, making them comparable to all international centers.”

He added: “Medical excellence is still and the world has not seen it. The internal growth is still in Saudi Arabia, and soon the world will hear about Saudi medical products closely, to know these unique and distinguished cadres, and I am a model of these cadres and a product of Saudi education and the Saudi University, where I trained in Canada. I returned with all my 16 years of practical experience at the National Guard Hospital in Riyadh as head of the cardiac surgery department, and I was recruited to America 6 years ago to work in congenital heart surgery.”

The most difficult operations

He also explained that “one of the most important foundations on which the doctor must build his work, hard work, determination and challenge is the secret of success, and not accepting second place, as I look forward to serving my country, Saudi Arabia, and to be happy with my family, and to perpetuate me and my family health and wellness.”

His wife and mother of his children

There is a lot that is difficult to enumerate in the scientific and practical history of Dr. Hani Negm, and some of them have great merit over him, and the most important of them is his wife and mother of his children Duaa, with whom she has fought a journey of support for his medical efforts since graduating from the Faculty of Medicine. And their prayers made the roads easier.

message to the world

Dr. Hani sent a message to the doctors, stressing that the skills of Saudi doctors in Saudi Arabia are comparable to doctors in the world, and that he is an example of this local product, and it remains for doctors to develop the infrastructure of scientific research, and that the goal is global, and as for his message to the world that risks must be taken To advance in science, we must get out of the framework of fear of advancing science due to lack of confidence in the result, and that if he thought in this way, he would not have performed the operation, and this child’s fate would be death, and there were many cardiologists around him trying to persuade him to refrain from performing the operation for not knowing the results, So he decided to go through the experiment for his conviction in this way, to prove the progress of science.

The story of his entry into the world of medicine

It is noteworthy that Dr. Hani Najm, whose name was among the pioneers of global medical achievements, was born in the south of Riyadh on Salam Street in 1962 AD, where he wished to enter the world of medicine since his childhood, and this wish was also the wish of his parents, may God have mercy on them, who stood next to him in This stage of life.

Speaking to Al-Arabiya.net, he said: I was keen to excel at the secondary level and obtain the distinction, and enter the College of Medicine at the “University of Riyadh”, which was recently called King Saud University, and I graduated from it in 1985, and at that time I did the internship year, I decided to specialize in the field of surgery due to my feeling of excellence in this field, and I decided to continue in this specialty.

He also continued: “I decided to choose heart surgery because I was fascinated by heart operations and the possibility of restoring the heart to its normal state. I joined the local surgery training “Arab Board” in 1986 AD, after which I was sent to Canada to complete the specialization of general surgery and cardiothoracic surgery for adults and children, and from there to specialization Flour in surgery for congenital diseases, children and adults.