An impressive video.. A Saudi saves a “dog” from a torrential torrent 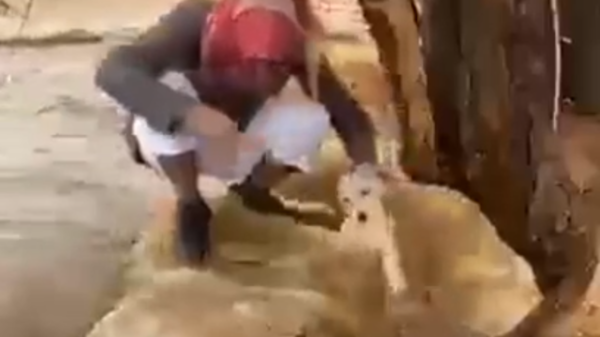 In a humanitarian and heroic act, a Saudi young man rescued a “dog” from a torrential torrent, while crying out for help and saving him from drowning, while a video clip documented the situation, and social media platforms buzzed during the past hours, in which a Saudi young man appeared venturing himself during the flow of torrents. To rescue a “dog” stuck in a torrential rain, after the rain, the humane youth’s work was admired by many who praised his behavior, and considered it a sign of humanity, chivalry and mercy.

Tweeters also suggested to animal welfare associations in Saudi Arabia to honor the young man, in order to enhance the principle of animal welfare, which has a religious and national dimension.

For his part, the legal researcher and advisor, Ziyad bin Mansour Al-Qurashi, praised the wonderful position and the great humanitarian work that the young man did in saving the animals that were nearly killed and killed by the torrent. Mercy to all creatures, and in the hadith of the Noble Prophet, may God bless him and grant him peace: (The merciful, the Most Merciful will have mercy on them.

And he showed that animals are unable to defend themselves, and mercy is with animals by providing food, housing and shelter for them, and God has arranged a great reward for those who do this good work, and made it a reason to enter Paradise, as it is one of the reasons for the forgiveness of sins and sins.