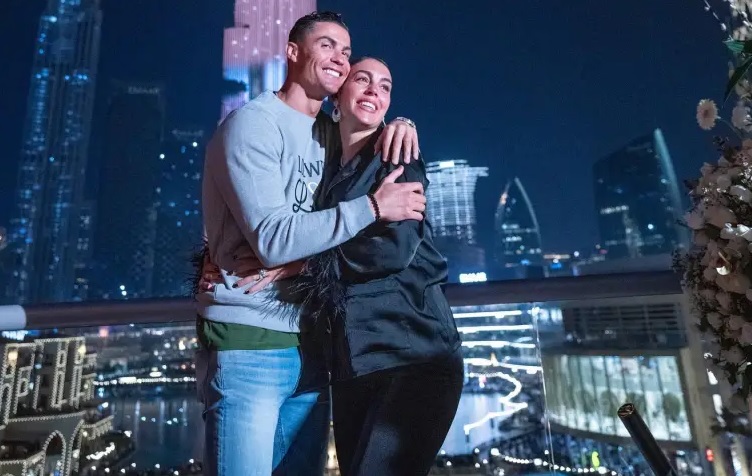 The visit of Portuguese star Cristiano Ronaldo and his wife Georgina Rodriguez to Dubai topped international newspapers and websites, highlighting the gift he gave her on her 28th birthday by placing her face on the tallest building in the world, as described by the British newspaper, The Sun.

The newspaper described Ronaldo’s gift as “ideal”, and said that the pictures of Georgina on the Burj Khalifa were amazing, and the gift was wonderful from Ronaldo, who stood with Georgina in front of the tower, and the cameras took pictures of them with Ronaldo’s children while the tallest tower in the world behind them, and they enjoyed there on a special occasion.

Ronaldo, who is visiting Dubai, enjoying a break from the crowded football calendar with his four children, had posted on his account on “Instagram” a video showing Georgina’s photos on the Burj Khalifa, and he wrote in Portuguese: “Congratulations, my love” and attached it to a heart and a birthday cake with candles.

She added that the tower is also the largest display screen in the world at night thanks to nearly 18 miles of cable, 1.1 million pixels and 118 tons of light beams and accessories, and the cost of placing an advertisement or a promotional message for three minutes on the front of the tower is a minimum of 50 thousand pounds. (250,000 dirhams), with the price hike on weekends.