Ancelotti after the historic quintet: He thirsts for more with Real 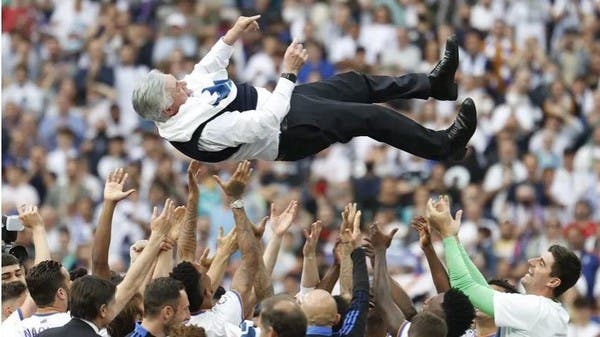 Real Madrid coach Carlo Ancelotti expressed his desire to win more trophies with Real Madrid, after he led the team to crown the Spanish League title on Saturday after beating Espanyol 4-0.

Real Madrid won the league title for the 35th time in its history, four matches before the end of the competition. Ancelotti became the first coach to win the league title in the five major European leagues, and the Italian coach still wants to win the Champions League, especially since the team will play the second leg of the semi-final against Manchester City next Wednesday, knowing that it lost the first leg 3-4.

Ancelotti said on the field after winning the Spanish League title: “We had a lot of emotions as we faced this challenge, the season was amazing. A lot of cohesion. I have to thank the players for their work and behaviour.”

“Today we should celebrate, not talk. We want to celebrate. It fills me with pride to win titles in the top five European leagues. I can say that I love what I do. It means that I have done a good job.”

And he added, “I’m proud. I want to continue winning titles with Real. See you on Wednesday. I will tell the fans on Wednesday that we need this atmosphere.”

The captain of the team, Marcelo, expressed his pride, dedicating the title to the loyal Real fans, “It’s great happiness. We won the title as quickly as possible and this is everyone’s job. Very happy and we must continue to add more. It is the results of our work, our joy, our sacrifice, and many other things.”

He added, “That’s why we won. Celebrating it with the fans is the best. Before we couldn’t (because of the pandemic), but now we can. The party is for them.”

He stressed, “It is the biggest joy, celebrating on the grounds of the best club in the world. Today we must celebrate. But an important match awaits us.”

Real Madrid goalkeeper Thibaut Courtois echoed what Marcelo had said: “It is great to win the league title with so many matches remaining. We have done a great job this year and we are very happy.”

He added, “We had an important consistency in the decisive matches, but above all this is how we crossed the difficult matches that we played after the El Clasico match (a 4-0 loss against Barcelona).”

He stressed, “We beat Celta and Seville in their stadiums, and we beat Getafe in our stadium… A big thank you to the fans for everything. Today the atmosphere was great, we really wanted to celebrate the title, because two years ago we could not celebrate with the fans because of the pandemic.”