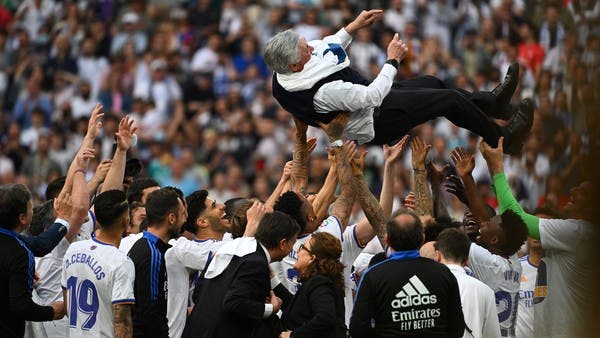 Italian coach Carlo Ancelotti has revealed that he will likely end his career as coach at club level once he leaves the post of Real Madrid coach, but he does not mind continuing to coach Real Madrid for another ten years.

Ancelotti, 62, became the first coach to win the title in the five major leagues in Europe, after leading Real Madrid to the Spanish League title.

Ancelotti’s coaching career continued for 26 years, during which he held 11 positions, and coached Real Madrid twice.

But Ancelotti is now thinking about his future and hopes to spend more time traveling and staying with his family.

Ancelotti said, in statements to the “Amazon Prime” service: “After Real, yes, I might stop. But if the club keeps me here for ten years, I will continue to coach him for ten years.

He added: “I would like to be with my grandchildren, go on vacation with my wife, there are many things that I can do and I would like to do when I am gone.”

He continued, “There are several places I have not gone to. I have not been to Australia. I did not go to Rio de Janeiro.

He added, “I would like to visit my sister more often.” The day I leave, I will do all these things.

With Real Madrid leading the Spanish league title, Ancelotti became the oldest coach to win the competition title, followed by Fabio Capello, who achieved this achievement when he was two years younger than him, when he led Real to the title in the 2006/2007 season.

Ancelotti has won three European titles during his coaching career at the club level, and has indicated that he may head to coaching at the national team level before the 2026 World Cup.