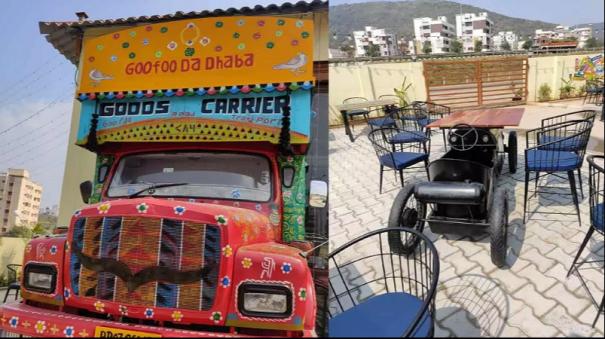 Guntur: A hotel built with auto parts in Andhra’s Guntur is attracting customers.

He designed the hotel in an innovative way on Guntur Mangalagiri National Highway to attract people. Accordingly, he converted the cabin of a lorry into the front of the hotel. By then, he set up a table and chairs so that he could eat with his family.

He turned old model cars into tables. He designed a hand washing station and a table on a bicycle. He created the bureau in the shape of a gas station. He named the hotel ‘GOOFOO’. People traveling in vehicles on the Guntur Mangalagiri National Highway, locals flock to see the vehicle-shaped hotel.

Krishna Prasad says, “We serve Andhra and Punjab cuisine in our restaurant. Meals are served in a ‘lunch box’ at the hotel. If you eat a full stomach and have leftovers, you can take them home in the same box. The number of people is increasing because of the amazing look of the restaurant and the delicious food,” he said.