Anger in a residential neighborhood inside Istanbul .. and residents queuing to shower in a public facility! 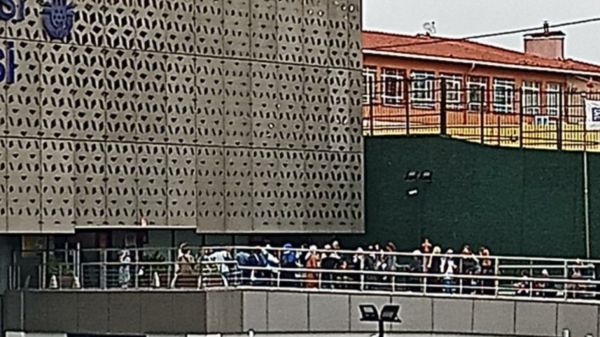 Residents of a residential neighborhood in Istanbul, which is the second largest city in Turkey, oppose an urban plan that the government seeks to implement despite their protest against this project and their refusal to leave their homes after receiving communications from their owners indicating the need to evacuate them as soon as possible, before the government backtracks on that later and raises controversy With a different decision.

The municipality of Fateh Tepe neighborhood, located in the Beyoglu district on the European side of Istanbul, ordered the electricity, water and gas institutions to cut off their services to the beneficiaries to force them to leave the neighborhood and start implementing the urban project that provides for the demolition of the neighborhood, but what happened was shocking and angered the defenders of the neighborhood. Human rights in Turkey.

In the details, the residents of this neighborhood refrained from leaving their homes despite the lack of electricity, water and gas, and against this background they used bathrooms inside a sports complex located on the outskirts of Fateh Tepe, according to photos published by local media.

The government retracted the necessity of evacuating us to our homes according to a decision issued on the eighth of this June, but the electricity and water companies continue to cut off their services from our homes.

Two homeowners in the neighborhood

Two of the homeowners, who were asked by the government to vacate their homes, said, “The compensation offered by the government to us in return for evacuating our homes was not equivalent to the value of our real estate. That is why we stood against the project and refused to leave our homes. As a result, the government temporarily withdrew from this project before it re-issued a decision. New demolition of the neighborhood in which we live.”

They added to “Al-Arabiya.net” that “the government retracted the necessity of evacuating us from our homes according to a decision issued on the eighth of this June, but with that the electricity and water companies continue to cut off their services to our homes, and then the government issued another decision opposing the first decision.”

On the eighth of this June, the Turkish government decided to stop demolishing the Fateh Tepe neighborhood, and issued an official decision to do so. On the tenth of this month, it issued another decision canceling the content of the first decision.

Both men demanded, on behalf of all the residents of the neighborhood, that the government should stop this project or provide alternative housing for the neighborhood’s residents, while providing financial compensation to the owners of the houses that will be demolished against the background of the government’s implementation of a new urban project.

They stressed that “the state is obliged by local laws to compensate the owners of houses that will be demolished.”

Both indicated that “the residents of the neighborhood will continue their opposition to this project at all costs, and therefore they will not evict their homes until they receive appropriate financial compensation.”

Since June 10, the owners of the houses that will be demolished in the neighborhood in Istanbul have sent many letters of protest to the Greater Istanbul Municipality, revealing their conditions in exchange for evacuating their homes, but Mayor Ekrem Imamoglu has not yet responded to their messages.