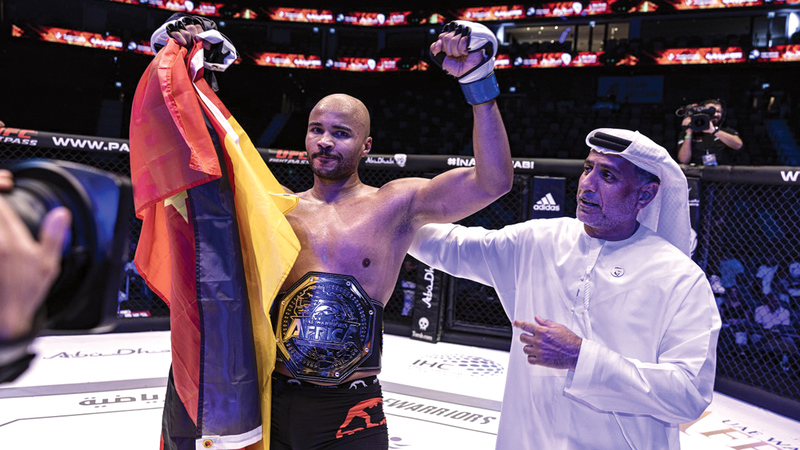 The Angolan Amilo Koesa won the third African edition (32) of the Emirates Mixed Martial Arts Championship series at the expense of Kevin Omar from Comoros in the main light heavyweight fight, which was held the day before yesterday at the Etihad Arena on Yas Island. Koesa’s victory came in the first Three minutes of the fight by technical knockout.

The President of the Emirates Federation of Jiu-Jitsu and Mixed Martial Arts, President of the Asian Confederation, First Vice President of the International Federation Abdel Moneim Al Hashemi, crowned the Angolan champion Amilo Koisa, in addition to the winners of the other 13 fights, in the presence of the Director General of Tourism at the Department of Culture and Tourism in Abu Dhabi Saleh Al Jaziri, and Chairman of the Organizing Committee of the championship And CEO of Palms Sports, organizing the event, Fouad Darwish.

In the rest of the fights, Moroccan Badreddine Diani defeated his Angolan rival Chido Esperanza in the middleweight, Cameroon’s Juares beat Sylvester Chivenbo of Zimbabwe in the featherweight, and Congolese Prince Aoun defeated his South African opponent Thiane Mandela in the heavyweight category.