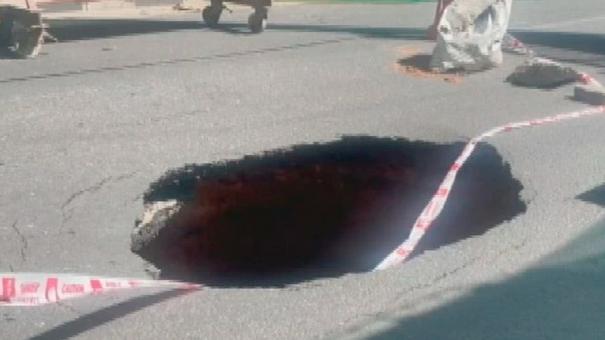 Bengaluru: A two-wheeler driver has been injured after falling into a sinkhole at the metro rail work site before the shock of the death of a mother and son due to the collapse of a metro rail pillar in Bengaluru.

A big pothole suddenly appeared on the road at 12.30 pm today (Jan.12) at the place where the metro rail work is going on on Rogue Brigade Road in Bengaluru. A man on a two-wheeler got stuck in this ditch and got injured. Fortunately, he sustained minor injuries. Following this, vehicular traffic was immediately stopped in the area. The incident was recorded on the CCTV camera there. Through it, the impact of the crater has been revealed.

Mother, Son Tragedy: A 35-year-old woman named Tejaswini and her 2-year-old son were killed when a metro rail pillar collapsed at Nagawara last Tuesday while the second phase (Phase 2B) metro train work was underway in Bengaluru. Three people, including Tejaswini’s husband, were seriously injured in the accident and are undergoing treatment. Three engineers have been suspended in connection with the incident. In this case, an accident took place on Rogue Brigade Road today.