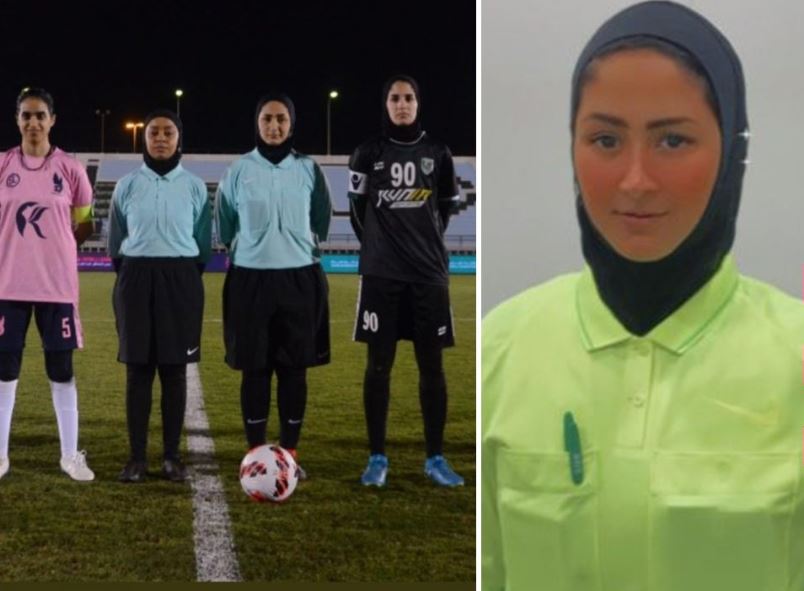 Today, Thursday, Anoud Al-Asmari became the first Saudi female referee to receive the international badge from the International Federation of Football Associations (FIFA), according to the list announced by the local association of the game.
Al-Asmari, whose name was mentioned among eight arena referees, said: “I am happy to be the first Saudi female referee to obtain the international badge in the history of Saudi sports.”
Since Prince Muhammad bin Salman assumed the position of Crown Prince in 2017, Saudi Arabia has witnessed a social openness after decades of closure and severe restrictions imposed, especially on women.
And in November 2021, Saudi Arabia launched the domestic women’s league with the participation of 16 teams, just a few years after the ban on women playing the game was lifted.
The Saudi women’s national team, coached by German veteran Monica Stapp, played its first official match last February when it beat Seychelles 2-0.
And about the idea of ​​entering the field of arbitration, Al-Asmari (34 years) said that she came up with it “in the year 2018, specifically when she registered in a workshop for women’s arbitration held by the Saudi Federation in the city of Jeddah, and she got acquainted with the laws and regulations of the game” and considered that it suits her personality.
Al-Asmari revealed that the main step in obtaining the international badge was in the year 2019, “when the Saudi Federation nominated me with four of my colleagues to join the FIFA arbitration course in Dubai, from which I gained experience, practice, and discussion with specialists in the field of arbitration.”
And about her beginnings, Al-Asmari explained: “With the first unofficial women’s league in Saudi Arabia two seasons ago, it became a wisdom of practice and recorded successes with the testimony of all specialists in the arbitration committees, and this is what made me insist on continuing the challenge and success for Saudi women in the field of arbitration to reach the international badge.”
In early December, Saudi Arabia submitted a request to host the 2026 Asian Women’s Cup, in continuation of the Gulf Kingdom’s efforts to host major sporting events. “This hosting will open new horizons for women’s football in the Kingdom and the region, which has made great progress despite its recent age,” said Yasser Al-Mishal, president of the Saudi Federation at the time.
The launch of the women’s league allowed Al-Asmari to “enter deeper into the sports system, and strengthened the position of the Saudi girl in the sports aspect,” she added.
And she continued, “I am currently playing my role as a referee in the Women’s Premier League, in which there are professional players from abroad, as well as managing matches in the First Division and women’s football in Saudi Arabia that race against time, and perhaps the interest of large clubs in the game will help its spread quickly.”
Regarding her agreement to run men’s matches, Al-Asmari, who was encouraged by her family and her daughter Nouf in her difficult task, said, “Every incident has a conversation when this matter is approved by those concerned in the Saudi Federation.”