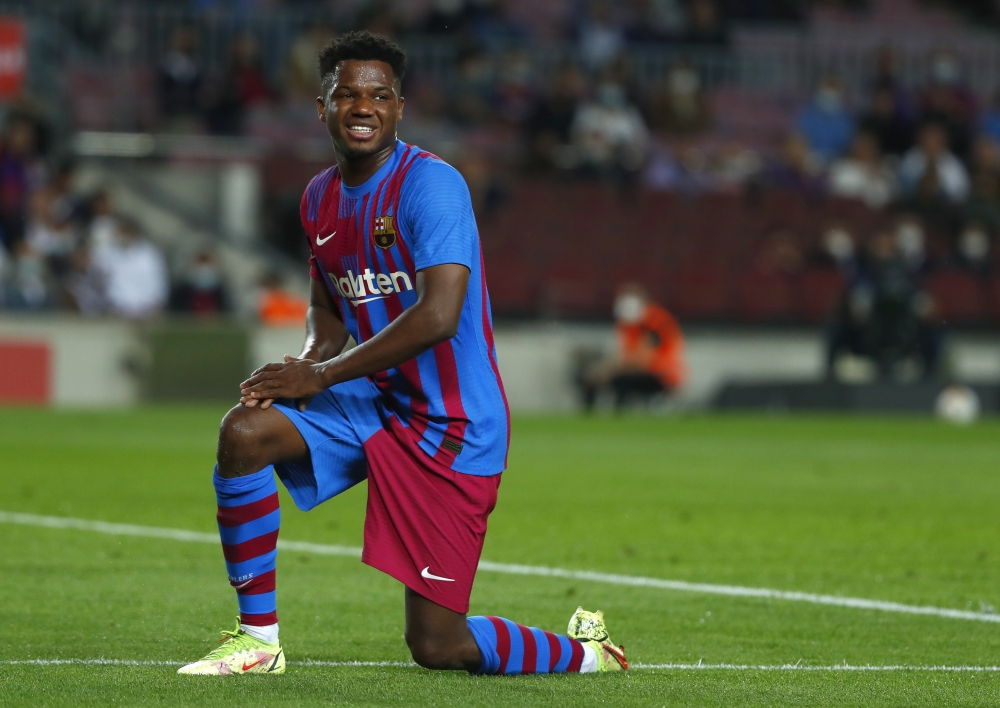 Barcelona is going through the worst financial and football crisis in its history, but the jewel Ansu Fati has become a glimmer of hope for the injured Catalan club seeking to win its first victory in the European Champions League, when it receives Dynamo Kyiv of Ukraine in the third round of Group E competitions tomorrow. He holds the number 10 and plays the role of savior for his team when things go wrong.. But he is not the Argentine legend Lionel Messi, who left for Paris Saint-Germain last summer.

The young diamond from the product of Barcelona Fati, who is considered the stage of salvation for the club, pushed the similarities with the little “flea” to their limits when he scored the equalizer against Valencia after exchanging the ball with Dutch newcomer Memphis Depay, with a shot from outside the penalty area worthy of the Argentine star, to contribute In his team’s 3-1 victory in the ninth stage of “La Liga”.

Santi Nola, director of the Catalan sports newspaper Mundo Deportivo, summed up what is happening, saying, “Before, Messi was the one who found solutions to everything. Yesterday, Fati did this. Many players are still used to Barcelona Messi. Now, they have to get used to Barcelona Ansu Fati.” . Between Messi and Fati, the numbers in the younger category skew in favor of the winger born in Guinea-Bissau: With 13 goals with the professionals, Fati is the player who scored the most goals before reaching the age of 19 in the Blaugrana shirt, ahead of Bojan Krkic (12) goals) and Messi (7).

Fati also scored with the first team of Barcelona, ​​15 goals after playing two thousand minutes, while Messi reached the barrier of 11 goals in the same period. According to “Opta” statistics, Fati is at the top of the category of the best in terms of success rate since February 2020 with 68.7 percent, where he scored 11 goals from only 16 shots.

‘Great talent’
Argentine newcomer Sergio Aguero, who played Valencia in his first game for Barcelona since joining from Manchester City after suffering a calf injury on August 9, praised his young colleague, saying, “Ansu Fati is a player with tremendous talent. The best, he is still A young man. We have to help him express his qualities, because there are not many players in the world who have his talent.”

Fati’s career was made of a mixture of shadow and light, as he was the victim of a meniscus fracture in his left knee on November 7, 2020 against Real Betis, the young striker underwent four surgeries and has been away from the green rectangle for almost a year. On September 26, during his return to the stadiums, Fati entered in the 81st minute and scored the third goal for his team in extra time against Levante in the seventh stage of the league. Against Valencia, in his first match since his injury, he scored a 1-1 equalizer and caused a penalty to take his team 2-1 before leaving his place to Brazilian Felipe Coutinho in the 59th minute.

At a time when Fati spreads joy in the hearts of the Catalan fans, this player, who will celebrate his 19th birthday on the 31st of this month, must light the path of his comrades in this crucial week, beginning on Wednesday in the main competition and then in the “El Clasico” against Real Madrid next Sunday.

Barcelona’s hopes of qualifying for the final price will diminish if it suffers a third loss in the Champions League at its “Camp Nou” stadium against Dynamo Kiev, while only England’s Newcastle in 2002 and Italy’s Atalanta in 2019 succeeded in turning the table and qualifying from the group stage after a disastrous start. Similar to the start of the Catalan club.