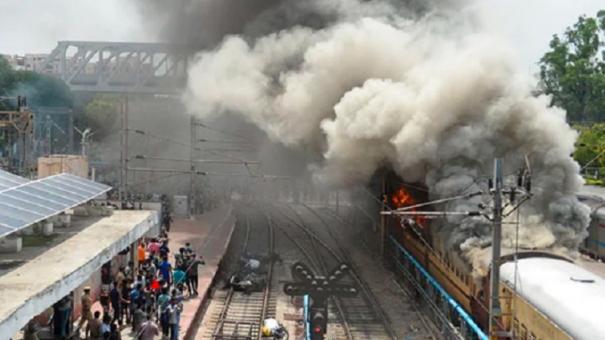 Violence has erupted in Bihar, Uttar Pradesh and Telangana in protest of the Agni road project. The service of 200 trains across the country has been affected by train burning incidents.

One person has been killed in a police firing at a Telangana railway station to quell violence. 8 people were seriously injured. All the injured have been admitted to Telangana Gandhi Hospital.

A senior railway official said that the lathi charge carried out by the railway security forces was so effective that they were forced to open fire without any effect of tear gas.

Train burning incidents that continue today: Train burning continues for the second day in Bihar today. Students gathered at a railway station in Begusarai district this morning to protest the incident. The Jammu Tawi Express train compartments were burnt. BJP office attacked in Lakkisarai district. The Sahasra Darbhanga passenger train in Bihar was set on fire. Two of these boxes were burned and damaged.

The struggle, which began in Bihar, has spread to the BJP-ruled states of Uttar Pradesh and Madhya Pradesh. Students protest at a railway station in Uttar Pradesh’s Palia district this morning. The guards who acted before they got into the violence drove them away.

In Gurugram 144: A total of 144 restraining orders have been issued in Gurugram in Haryana amid escalating violence in Bihar, Uttar Pradesh and Telangana. The city of Gurugram in Haryana is located on the border of Delhi and Haryana. There are a lot of job fairs here. Police said 144 restraining orders have been issued as a precautionary measure as the situation could worsen if anything goes wrong there.

Rahul Tweed: The Congress MP who first recorded his protest. Rahul Gandhi has once again slammed the federal government on Twitter. The federal government could not satisfy anyone. He criticized the Agni Path project for not being accepted by students, farmers not accepting agricultural laws, GST not being accepted by traders and economists not accepting the devaluation measure.

Eligible to join the Army: VP Malik led the Indian Army to victory during the Kargil War. In an interview with private television, he said, “The army is a volunteer force. It’s not a welfare state. All those in it must be the best soldiers fighting for the nation. They must be the defenders of the nation.

Why Opposition to Agni Path: The Union Cabinet recently approved the introduction of the Agni Path project to reduce pension expenditure in the Army. It was announced that the selected players can work on contract basis for a period of 4 years. Of these, 25 per cent will be retained in the army for 15 years, while others will be paid between Rs 11 lakh and Rs 12 lakh without retirement. This new policy has been criticized by many. Meanwhile, youths interested in joining the army are protesting in Bihar, Jharkhand, Uttar Pradesh, Rajasthan and Haryana demanding the withdrawal of the Agni route project.