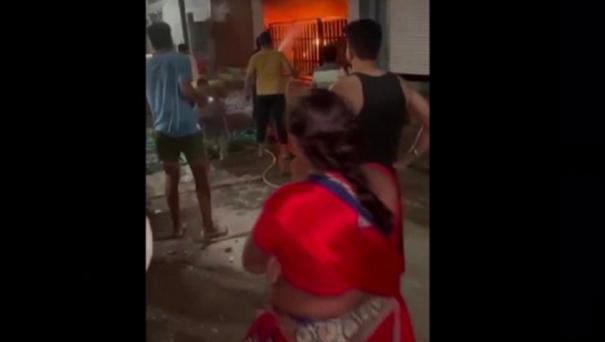 Seven people, including two women, were burnt to death in a fire that broke out in an apartment in Indore, Madhya Pradesh. More than 5 were injured. Hospital sources said the condition of some of them was critical.

There is a two-storey apartment in the Swarna Bagh Colony in Indore. It is home to many families. The fire broke out at 3.10 am today (May 7). People from that apartment were in a deep sleep since it was early morning. Then a sudden fire spread to nearby two-wheelers. The fire then spread rapidly throughout the building. Of these, 7 died, including 2 women, and more than 5 were admitted to hospital for treatment. Hospital sources said the condition of some of them was critical. It is feared that this will increase the death toll.

Preliminary investigations have revealed that the electrical leak was the cause of the accident. Ansar Patel, the owner of the building, was subsequently arrested by police. He is being further investigated. The fire was completely extinguished at 6 a.m. after a 3-hour struggle. However, the apartment was completely damaged.