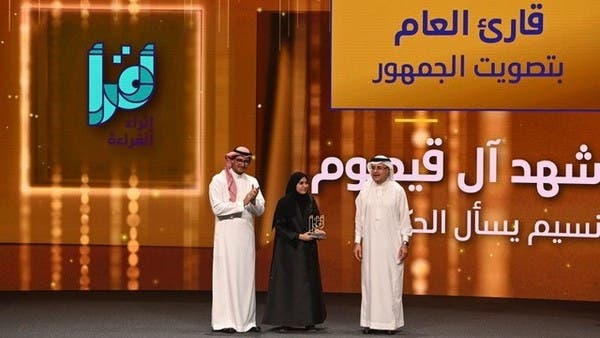 In the presence of the President and Chief Executive Officer of Saudi Aramco, Engineer Amin bin Hassan Al-Nasser, the King Abdulaziz Center for World Culture (Ithra) crowned the winners of the “Iqra” competition in its seventh edition, which was concluded by the Center on the evening of Saturday, June 25, 2022 AD (26 Dhul-Qa’dah 1443 AH). The ceremony included a large gathering of intellectuals, writers and those interested in cultural affairs, who were briefed on the long journey in which the winners were able to achieve a series of impressive successes during the reading enrichment program “Read”, which qualified them to reach the final stages of the finals. The ceremony also included honoring the winners of the Reader of the Year title. Reading ambassadors and translation ambassadors.

On this occasion, Eng. Amin Al Nasser congratulated the winners and participants, saying: “We live in a rapidly developing world that faces challenges that require innovative minds and creative abilities in thinking, communication and cooperation, to build a better future for humanity. And our wise leadership, which launched unprecedented positive and pioneering transformations within the framework of Vision 2030, You see that there are no limits to aspirations, especially among young people, and we at Aramco are convinced that our greatest wealth is not oil and gas, but human wealth, and we seek to contribute effectively to building the future within the company’s strategy to achieve growth, prosperity and sustainability, so the “Read” competition is a stimulus to knowledge The spirit of intellectual exploration is the fuel that drives the human mind.”

Al-Nasser announced that the enrichment of reading “I read” will expand to include the participation of male and female readers from all Arab countries in the next session of the program, which will, God willing, take a distinguished position on the map of Arab culture. The “Read” competition had an impact on achieving this achievement.

For his part, the Director of the King Abdulaziz Center for World Culture (Ithraa), Hussein Hanbaza, expressed his pride in the outputs of the “Iqra” competition, which has witnessed rapid development since the launch of the Reading Enrichment Program in 2013, as well as the increase in the number of participants, as their number exceeded 75,000 readers. Noting that Ithra seeks to develop the program on an annual basis, especially after it has become international, so that lovers of reading can join it; To expand the scope of reading and readers, Hanbaza said that reading is one of the protective arms of the Arabic language, and is biased to the human being as a purely human development that contributes to the creation of thought from the various arts of Arabic literature, and pointed to the role played by the competition in acquiring many knowledge and raising the level of awareness through Spreading the spirit of competition among young people, praising the role that Ithra seeks to play in promoting aspects of culture and consolidating the pillars of reading, through his library, which has received more than one million visitors since the center’s inception.

While the ceremony witnessed the speech of the guest of honor of the ceremony, His Excellency the Ambassador of the Custodian of the Two Holy Mosques to the United Arab Emirates, Mr. Turki Al-Dakhil, which was titled “So that you do not suffer the harshest types of deprivation,” linking between diving into the world of books and talking about the book, which is difficult, interesting, a great product and an honorable friend. It topped a wide place in the thinking space of Arab scholars, philosophers, poets and writers, citing what the Scottish writer, Arthur Conan Doyle said, that “the love of books and reading is among the greatest blessings and divine gifts to us”, only those who lived it realize it, and deprived of it from other preoccupations, concluding his speech by saying Certainly, deprivation is of types and types, but the most painful and harmful kind is deprivation of the pleasure of reading.

What seems remarkable is that a group of art and culture writers witnessed the honoring of the winners. The writer, novelist and Nobel Prize winner for literature Orhan Pamuk gave a speech in which he referred to the importance of writing and the beginnings of his novels that made him a global figure, out of his belief in the art of the novel and the sciences of literature, pointing to the most important Secrets that inspire writers and become keys to the novel’s treasures with the passage of time, including “isolation, belief in humanity, commonalities between human features and the writer.” He concluded his speech by asking why do we write? Answering that writing is an innate matter to him, explaining at the same time that his fear of being among the forgotten, he writes his novels in an endless stream.

Amid moments of anticipation and breath-holding for the contestants and the dense audience in the “Read” tracks, the names of the winners were announced, while the reader of the year was crowned by the audience, which was won by the reader Shahd Al-Qaisum.

The committee also announced the names of the winners of the reading ambassadors track:

While the committee announced the path of young readers, where Zainab Al-Nasser won the title, while the jury chose the reader Muhammad Al-Khalifa after all criteria were applied to him. The coronation is nothing but a win and a sweeping merit for their dazzling creativity.