Arbitrary executions and torture..European and international trend to prosecute Russia for war crimes 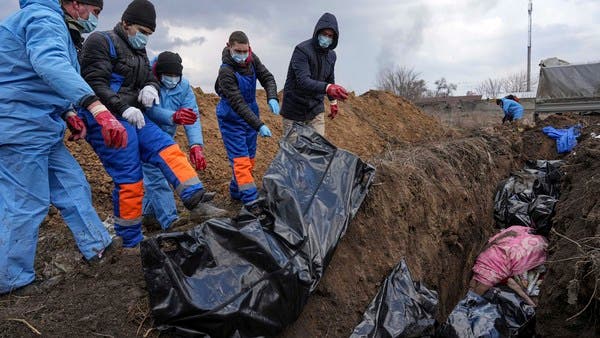 Amnesty International said it had documented widespread war crimes committed by Russian forces in communities around the Ukrainian capital, Kyiv, including arbitrary executions, shelling of homes and torture.

“The pattern of crimes committed by Russian forces that we have documented includes both unlawful attacks and the deliberate killing of civilians,” said Agnes Callamard, Secretary-General of Amnesty International, in a statement today. Justice”.

The organization said it collected evidence and testimonies in eight cities near Kyiv, including Bucha. After Russian forces withdrew from Bucha in April, bodies were found lying in the streets, many with their hands tied behind their backs, and in mass graves. The governor of the Kyiv region, Oleksandr Pavlyuk, said that at least 1,235 civilian bodies had been found in the region.

Testimonies of Ukrainians who lost loved ones

An Amnesty International report described the shooting in Bucha of Yevvin Petrashenko, a 43-year-old sales manager, who was shot in his kitchen while his wife and children were hiding in the basement. The Russian army allowed his wife, Tatiana, to enter the apartment, where she found her husband’s body.

The report quoted her as saying, “Yeven was lying on the kitchen floor dead. He was shot in the back (near) his lungs and liver. His body remained in the apartment until March 10, when we were able to bury him in a grave below the ground in the courtyard.”

The report said that their neighbor Leonid Bodnarchuk, a 44-year-old construction worker, was shot dead by Russian soldiers as he climbed stairs, and then the army threw a grenade into the stairwell.

The report added that the executions in Bucha were carried out with specialized rifles used by some elite Russian units. Amnesty International staff found 7N12 black-tipped armor-piercing munitions, caliber 939 x mm, at the scene, used by elite units of the Russian army.

The investigation also described the bombing of the city of Borodinka, in which at least 40 people were killed in an indiscriminate shelling that destroyed eight residential buildings.

In this context, the European Council announced, today, Friday, the adoption of a mandate to adopt new rules that allow the European Agency for Cooperation in the Field of Criminal Justice (Eurojust) to collect and store evidence of war crimes.

The council said in a statement that the new rules would allow the agency to store and preserve evidence related to war crimes, including satellite images, photos, videos, audio recordings, DNA files and fingerprints.

He added that the rules will also allow this evidence to be processed and analyzed in close cooperation with the European Union Law Enforcement Cooperation Agency (Europol), and shared with relevant national and international authorities, including the International Criminal Court.

The statement stated that there is sufficient basis to believe that war crimes and crimes against humanity have been committed and continue to be committed in Ukraine, stressing that the European Union will urgently take all necessary measures to ensure that the perpetrators of these crimes are held accountable.

Ukrainian President Volodymyr Zelensky stressed that an investigation was underway into what he described as the crimes committed by the Russian army against the people of his country.

He also added that his country’s position is quite clear, considering that “every Russian criminal must be brought to justice,” according to what the Ukrainian news agency quoted Zelensky as saying.

He stated that since the launch of the Russian military operation in Ukraine on February 24, Kyiv has accused the Russians of committing war crimes and violations in the country.

These accusations escalated, especially after the Russian army withdrew from the vicinity of the Ukrainian capital (late March 2022), when a number of mass graves were found in some towns, especially Bucha.

While Moscow has repeatedly denied these accusations, describing them as fabrications in order to distort the image of its army.

However, many Western countries have recently intensified their calls for investigations into possible war crimes committed on Ukrainian soil.

The United Nations, in turn, called on Russia to cooperate with the International Criminal Court in the possibility of such crimes.