Are you a Ram temple priest to say that? – Mallikarjuna Kharge condemns Amit Shah’s speech 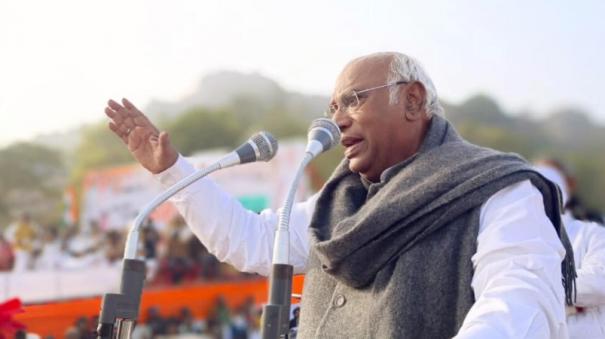 Panipat: Congress president Mallikarjuna Kharge has strongly condemned Amit Shah’s speech that the Ram temple in Ayodhya will be ready by January 1, 2024. And he questioned what kind of Ram temple priest you are to say that.

While inaugurating the Jana Viswas Ratha Yatra in Tripura last Thursday, Home Minister Amit Shah said, “The Congress party blocked the attempt to build a Ram temple in Ayodhya through court cases. But after the Supreme Court verdict, Prime Minister Narendra Modi started the construction of the temple there. January 1, 2024- On the date, the grand Ram Temple at Ayodhya will be ready.” said.

The Congress party has questioned why such an announcement should be made now when elections are going to be held in various states of the country.

Karke then said: Everyone has faith in God. But with the assembly elections in Tripura and the parliamentary elections in May next year, you announce that the Ram temple will be opened soon.

The BJP made various promises before the elections, but forgot them after coming to power. Inflation and unemployment are increasing in the country. Due to the rise in inflation, the common man could not afford even the essentials.

Unemployment has risen to a 45-year high. Educated youths with degrees in engineering, medicine and management are suffering from unemployment. But the government Modiji and Amit Shah are not concerned about these.

They don’t care about unemployment, economic situation, inflation. Their thoughts are only on elections.

The Congress party led by Rahul Gandhi came to power in various states. But the BJP resorted to various tactics to topple those governments elected by the people. They claim to believe in democracy and overthrow popularly elected governments.

BJP made promises and then forgot them. All those promises are just gimmicks to get promises. They have Rama in their words and knives in their hands. They engage in divisive, partisan politics.